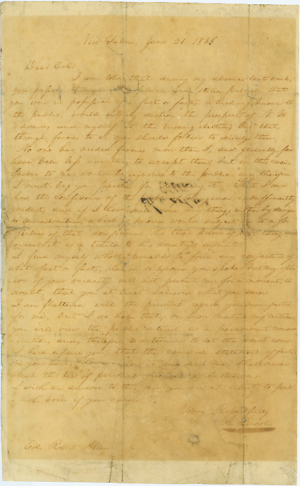 Abraham Lincoln to Robert Allen, 21 June 18361
New Salem, June 21. 1836Dear Col.
I am told that during my absence last week, you passed through [this?] place, and stated publicly, that you were in possession of a fact or facts, which, if known to the public, would entirely destroy the prospects of N. W. Edwards and myself at the ensuing election; but that, through favour to us, you should forbear to divulge them.2
No one has needed favours more than I, and generally, few have been less unwilling to accept them; but in this case, favour to me, would be injustice to the public, and therefore I must beg your pardon for declining it. That I once had the confidence of the people of Sangamon; is sufficiently evident, and if I have since done any thing, either by design or misadventure, which if known, would subject me to a forfeiture of that confidence, he that knows of that thing, and conceals it, is a traitor to his country's interest.
I find myself wholly unable to form any conjecture of what fact or facts, real or supposed, you spoke; but my opinion of your veracity, will not permit me, for a moment, to doubt, that you at least believed what you said.
I am flattered with the personal regard you manifested for me, but I do hope that, on more mature reflection, you will view the public interest as a paramount consideration, and, therefore, l determine to let the worst come. I here assure you; that the candid statement of facts, on your part, however low it may sink me, shall never break the tie of personal friendship between us.
I wish an answer to this, and you are at liberty to publish both if you choose3
Verry RespectfullyA. LincolnCol.[Colonel] Robert Allen.
<Page 2>
[docketing]
Lincolns Letter
1The entirety of page one is in Lincoln’s handwriting.
2On August 1, 1836, both Lincoln and Edwards were elected to represent Sangamon County in the Illinois House of Representatives.
Theodore C. Pease, ed., Illinois Election Returns, vol. 18 of Collections of the Illinois State Historical Library (Springfield: Illinois State Historical Library, 1923), 299.
3No reply to Lincoln’s letter has been found. It does not appear that Robert Allen chose to publish Lincoln’s letter at the time.