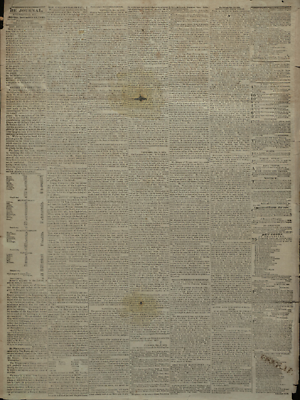 Related Document(s):
Resolution regarding a Report from the Board of Public Works

Summary of Legislative Debate on Resolutions Asking Information on Railroad and Fund Commissioners, 8 December 1838
Mr.Hardin of Morgan, asked that certain resolutions presented by him on Monday, asking for detailed information upon every subject connected with the duties of the Rail road and Fund Commissioners, should be taken up.1 Several amendments were offered to the resolution which were agreed to. Mr. Lincoln in reference to the resolutions said, that so far as he understood their object it was not an unfriendly one towards the Internal Improvement system. His own course was identified with the system. We had gone too far to recede, even if we were disposed to do so. He wished the resolution might pass, so as to enable the friends of the system to detect any errors which might be found in its prosecution, so as to prevent their recurrence. Gen. Thornton remarked that the information sought for was required by law to be laid before the House. He thought that proper time should be given to the Commissioners to make their reports; and then, if there were any defect in the information sought for, the necessary call could be made. He wished that the Internal Improvement system should be sustained along by its merits. He had learnt that the Commissioners were not opposed to the call set forth in the resolution. Mr. Hardin in reply said that the commissioners had heretofore made their reports in gross; his resolution called for details. He did not consider that they contained any insinuations against the conduct of any of the commissioners. Mr. Ficklin said, that he was the friend of the system—uncurtailed and uncrippled;—and as such was in favor of the passage of the resolutions He would support them even if they came from its opponents. He was desirous that the system should be sustained along by its merits. The resolutions were adopted.2
1On December 5, John J. Hardin introduced the resolutions in the House of Representatives. They called for a report on the progress of public works projects initiated under the provisions of the internal improvement act of 1837. “Rail road and Fund Commissioners” were references to the boards of Fund Commissioners and Public Works. Section one of the internal improvement act created a three-person board of fund commissioners to negotiate loans, buy and sell bonds, deposit and withdraw money, and administer the various fiscal aspects of the internal improvement program. Section four of the act created a seven-person board of public works to promote, maintain, supervise, and direct the system of internal improvements.
Illinois House Journal. 1838. 11th G. A., 1st sess., 20-21, 49-50.
2On December 11, the auditor of public accounts, in compliance with the resolutions, sent the House copies of reports of the Board of Fund Commissioners made to the auditor. This debate occurred as charges of fraud and corruption were being brought against the members of both boards. In January 1839, the House and Senate established a joint select committee to investigates these charges. In February, the joint select committee issued majority and minority reports, but the General Assembly took no action, tabling the reports.
Illinois House Journal. 1838. 11th G. A., 1st sess., 56-57, 150, 153, 158; Illinois Senate Journal. 1838. 11th G. A., 1st sess., 117-18, 125-26, 128, 371, 500; John H. Krenkel, Illinois Internal Improvements 1818-1848 (Cedar Rapids, IA: Torch, 1958), 94-99.