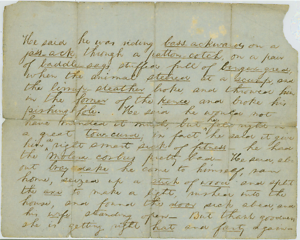 Bass-Ackwards, [September 1836 - February 1861]1
He said he was riding bass-ackwards on a jass-ack, through a patton-cotch, on a pair of baddle-sags, stuffed full of binger-gred, when the animal steered at a scump, and the lirrup-steather broke, and throwed him in the forner of the kence and broke his pishing-fole. He said he would not have minded it much, but ^he^ fell right in a great tow-curd; in fact, he said it give him ^a^ right smart sick of fitness—he had the molera-corbus pretty bad– He said, about bray dake he come to himself, ran home, seized up a stick of wood and split the axe to make a light, rushed into the house, and found the door sick abed, and his wife standing open– But thank goodness she is getting right hat and farty again–
1This tale strings together “spoonerisms,” a type of wordplay in which the author transposes the first letter in two or more words for humorous effect. Spoonerisms and other forms of wordplay were popular in the early 19th century. Although written in Abraham Lincoln’s handwriting, it is unclear whether the text originated with Lincoln. Jesse Weik, one of Lincoln’s early biographers, stated that the document had been given by Lincoln to a Springfield court official. Editors have been unable to determine a more specific date for the document.
William B. McGregor, Linguistics: An Introduction, 2nd ed. (London and New York: Bloomsbury, 2015), 428; Emmanuel Hertz, The Hidden Lincoln (New York: Blue Ribbon Books, 1940), 400.