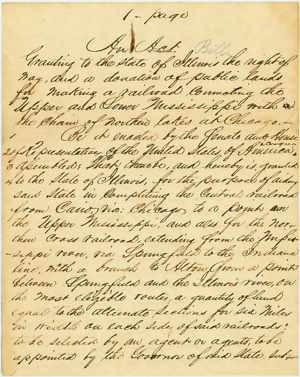 1—page
An Act, ^Bill.^
Granting to the state of Illinois the right of way, and a donation of public lands for making a railroad connecting the Upper and Lower Mississippi with a the chain of Northern lakes at Chicago.
said State in Completeing the Central railroad from Cairo, via: Chicago to a point on the Upper Mississippi, and also for the Northern cross railroad, extending from the Mississippi river, via Springfield to the Indiana line, with a branch to Alton from a point between Springfield and the Illinois river, on the most eligible routes, a quantity of land equal to the alternate sections for six Miles in width on each sides of said railroads; to be selected by an agent or agents, to be appointed by the Governor of said state sub-
<Page 2>
<Page 3>
2 page
ject to the approval of the Secretary of the Treasury, and the alternate sections, which remain to, the United States by the grants in this act, shall not be sold for less than two dollars and fifty cents per acre, at which price a preemption is hereby granted to the state of Illinois for 5 years from the passage of this act. Sec 2. And be it further Enacted, That the said lands hereby granted to the said State shall be subject to the disposal of the legislature thereof for the purposes aforesaid, and no other; and the said railroads, and each of them, shall be, and remain a public highway for the use of the goverment of the United States, free from toll or other Charge, upon the transportation of troops and munitions of war of the U.S.—Sec 3d And be it further Enacted, That the lands hereby granted, shall be, disposed of by said state only in the Manner following, to wit: that a quantity not exceeding sixty sections on each of said roads, and including within a Continuous1
<Page 4>
<Page 5>
3 page
length of ten Miles of each road may be sold, & when the Governor of said state shall Certify to the Secretary of the Treasury that ten miles of any of said roads are completed, then another like quantity may be sold on that road, and so from time to time, until said ^said that ^ roads are Completed, and if said roads are Not Completed within ten years, no further sales shall be made, and the lands unsold, shall revert to the United States.—Sec 4th And be it further enacted, That before it shall be Competent for the state of Illinois to dispose of [...?] any of the lands to be selected as aforesaid, a plat or plats of the Courses, distances, and points of termination of said railroads shall be furnished by the said State to2 the Commissioner of the General Land Office.—^Sec 5^ And be it further enacted, That the State of Illinois be, and is hereby, authorized to survey, and mark, through the public lands of the United States the routes of said railroads, one hundred feet, the width of each respectively, to be reserved from sale on the part of the United States, on each side of the Central line of said railroads
<Page 6>
<Page 7>
4 Page
and the use thereof forever vested in the said state for the purpose aforesaid, and none other. Sec 6. And be it further enacted, That no lands reserved for schools[...?] or for military or other purposes, nor Mineral lands, nor any to which the right of pre-emption has atttached, shall be selected by said State under this act. Sec 7. And be it further enacted, That the United States Mails shall be carried on said roads, under the regulations of the Post office Department at the Minimum price for similar services paid on others railroads, and in case of dis^a^greement between the State and Department as to the price, then the matter in dispute shall be referred to the United States district judge for said state.
<Page 8>
[docketing]
655
[docketing]
H R. 655
December 11, 1848
Mr Robert Smith on leave introduced the following bill which was read twice and referred to the Committee on Public Lands.
[docketing]
Robt Smith
59 HR. Pub. Lands. [...?]
[docketing]
4
[docketing]
A Bill
see title within
1Last sentence of document is cut off.
2“of” changed to “to”

A Bill Granting to the State of Illinois the Right of Way and a Donation of Public Lands for Making a Railroad Connecting the Upper and Lower Mississippi with the Chain of Northern Lakes. [1848-12-11]. /documents/D249826. The Papers of Abraham Lincoln Digital Library.