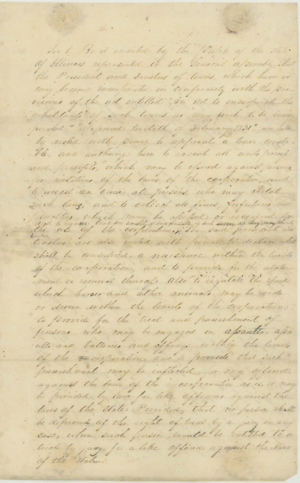 Related Document(s):
An Act Further Defining the Powers and Duties of Trustees of Incorporated Towns

Sec[Section] 1 Be it enacted by the people of the state of Illinois represented in the General Assembly, That the President and Trustees of towns, which have or may become incorporated in conformity with the provisions of the act entitled “An act to incorporate the inhabitants of such towns as may wish to be incorporated” “approved twelvth of February 1831,” are hereby vested with power to appoint a town constable, and authorize him to execute all writs[,] process[,] and precepts, which may be issued against persons for violations of the laws of the corporation, and to arrest on view all persons, who may violate such laws, and to collect all fines, forfeitures[,] and penalties, which may be assessed or recovered for the use of the corporation ^and to require bond and security of said constable in such sum as they may think proper^. The said president and trustees are also vested with power, to declare what shall be considered a nuisance within the limits of the corporation, and to provide for the abatement or removal thereof: also to regulate the speed which horses and other animals may be rode or driven within the limits of the corporation; to provide for the trial and punishment of persons who may be engaged in assaults, assaults and batteries[,] and affrays, within the limits of the incorporation and to provide that such punishment may be inflicted for any offence against the laws of the incorporation as is, or may be provided by law for like offences against the laws of the state: Provided, that no person shall be deprived of the right of trial by a jury in any case, when such person would be entitled to a trial by jury, for a like offence against the laws of the state.
<Page 2>
Sec 2 The President and trustees as aforesaid are further authorized to provide for the punishment of offenders by imprisonment in the county jails, in all cases where such offenders shall fail or refuse to pay fines, which may be assessed, or forfeitures or penalties which may be recovered: Provided, that no person shall be imprisoned under the provisions of this [s?] section for a longer period that twelve hours for every five dollars of any fine assessed for forfeiture or penalty recovered.
Sec 3 The said President and trustees are also authorized to adopt such laws for the security of waggons and other carriages which may be used, a within the limits of the corporation; and for the protection of the inhabitants against injury, by reason of horses or other animals fastened to such waggons or carriages runing with the same, as they may deem necessary; also to provide for the punishment of persons who may at any time, disturb the peace of the inhabitants of the town, or the deliberations or proceedings of any public meeting of such inhabitants.
Sec 4 The said President and trustees shall also have power to regulate the fees and compensation of all officers of the Corporation.
This act shall take effect from its passage.
<Page 3>
<Page 4>
[docketing]
Senate
A Bill entitled An act further defining the powers and duties of Trustees of incorporated1 towns.
[docketing]
[12]/[30]/[1834]
Engrossed.
[docketing]
[01]/[31]/[1835]
White, Leonard
To be enrolled
Sec. Senate
1“Incorporated” changed to “incorporated”

A Bill Further Defining the Powers and Duties of Trustees of Incorporated Towns. [1835-01-24]. /documents/D251537. The Papers of Abraham Lincoln Digital Library.