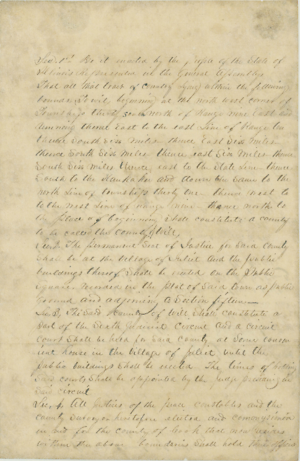 Related Document(s):
An Act to Establish the County of Will

Sec[Section]. 1st Be it enacted by the people of the state of Illinois Represented in the General Assembly, That all that tract of country Lying within the following bounds; (To wit) beginning at the north west corner of Township thirty seven north of of Range nine East and running thence East to the east Line of Range ten thence south six miles, thence East six miles, thence south six miles, thence east six miles, thence south six miles thence east to the state Line, thence south to the Kankakee and down the same to the north Line of township thirty one, thence west to the west Line of Range nine, thence north to the place of beginning shall constitute a county to be called the county ^of^ Will.
Sec. 2. The permanent seat of Justice for said County shall be at the village of Juliet and the public buildings thereof shall be erected on the public square, recorded in the plat of said town as public ground and adjoining to Section fifteen.
Sec. 3. The said county of Will shall constitute a part of the sixth Judicial Circuit and a circuit court shall be held for said county at some convenient house in the village of Juliet until the public buildings shall be erected. The times of holding said courts shall be appointed by the Judge presiding in said circuit
Sec. 4. All Justices of the peace constables and the county surveyor heretofore elected and commissioned in and for the county of Cook that now resides within the above boundaries shall hold their offices
<Page 2>
in and for said county of Will.
Sec. 5th The Legal voters of said county shall meet at the Several places of holding elections in the different precincts as now organized within within the above boundaries on the first monday in march next, appoint Judges and clerks of elections and proceed to elect three county commissioners, a Sheriff, a coranor and Recorder for said county, and the returns of said election shall be made by said Judges and clerks to the Justices of the peace in said county, any three or more of whom shall meet at the village of Juliet within seven days after said election and proceed to open said returns and in all things perform the duties required by Law of the clerks of county commissioners courts, and Justices of the peace in Like cases.
Sec. 6. For all officers except county offices the county shall vote with the county of Cook the returns of the election of which shall be made to the Clerk of the County Commissioners Court for the County of Will, by whom a certified abstract of the returns of such election shall be made to the clerk of the County Commissioners Court of Cook County within seven days thereafter.
[certification]
12/30/1835
Prickett, David (Pricket)
Passed H. R. Decr 30th 1835
D. Prickett clk[clerk]. H. R.
<Page 3>
<Page 4>
[docketing]
H. Reps
A Bill for, An Act to establish the county of Will.
[docketing]
Se Commee
Vance
Strode &
Gatewood1
[docketing]
Engrossed
[docketing]
[01]/[12]/[1836]
Prickett, David (Pricket)
To be Enrolled
clk. H R
1These senators formed the select committee that considered the bill.
Illinois Senate Journal. 1835. 9th G. A., 2nd sess., 197.