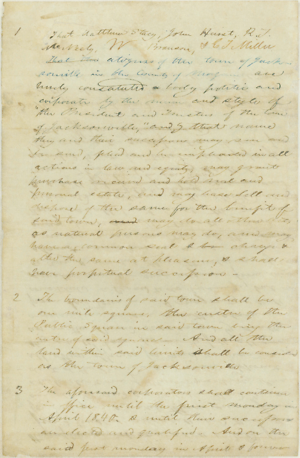 Related Document(s):
An Act to Incorporate the Town of Jacksonville, and for Other Purposes

1 That Matthew Stacy, John Hurst, R. T. McNeely, W Branson, & E T Miller That the citizens of the town of Jacksonville in the county of Morgan are hereby constituted a body politic and corporate by the name and style of “the President and Trustees of the town of Jacksonville,” and by that name they and their successors may sue and be sued, plead and be impleaded in all actions in law and equity, may grant[,] purchase[,] receive[,] and hold real and personal estate, and may lease[,] sel[,]l and dispose of the same for the benefit of said town, and may do all other acts as natural persons may do, and may have a common seal & be change & alter the same at pleasure, & shall have perpetual succession.
2 The boundaries of said town shall be one mile square, the center of the Public Square in said town being the center of said square. And all the land within said limits shall be considered as the town of Jacksonville
3 The aforesaid corporators shall continue in office until the first Monday in April 1840 & until their successors are elected and qualified. And on the said first Monday in April & forever
<Page 2>
thereafter an election shall be held for five trustees, who shall hold their offices for one year until their successors are elected and qualified. Said Trustees shall elect one of their own body President of the Board, and shall appoint all other officers for said corporation, they shall have power to fill all vacancies in the Board occasioned by death[,] resignation[,] or six months absence from said town. A majority shall constitute a Board to do business, but a smaller number may adjourn from day to day & compel the attendance of absent members in such manner & under such penalties as the board may provide. The trustees of said town shall be at least twenty one years old, & citizens of the United states & shall ^be residents & citizens in^ possess a freehold estate in said town. Those persons ^residing in said town^ only shall be qualified to vote for trustees who possess the requisite qualifications to vote for state officers., & have resided
3 The officers of said town shall consist of one clerk, one town constable who shall have & perform all the duties of town constable as required and authorised in
<Page 3>
the act entitled “an act to amend an act to incorporate further defining the duties of trustees of incorporated towns,” approved Jany[January] 31st 1835, They one Treasurer & such other officers as the said President & Trustees of the said town may see proper to appoint, & said officers shall give bond & security in such sum as and in such manner as may be required by the Board of Trustees of said town. And said officers shall be removable at the pleasure of the Board of Trustees.
4 The Sixth, Seventh, eighth, ninth, tenth, eleventh, twelfth, thirteenth, fifteenth seventeenth, & eighteenth sections of an act entitled “an act to incorporate the town of Upper Alton” approved February 18th 1837, are hereby declared to be applicable to “the said President & Trustees of the town of Jacksonville[”] ^and the tax mentioned in the sixth section of said act shall be in lieu of any county tax on the real estate in said town, and all ^ the powers, duties[,] and restrictions therein mentioned shall be applied to said town President & Trustees as fully as the same were herein set forth.
5 The said town of Jackson The acts of the present President & Trustees of the town of Jacksonville shall be considered as
<Page 4>
binding & in full force, until the first meeting of the Board of Trustees to be elected under the provisions of this act.
This act to ^shall^ take effect on the first Monday in April next, and the present Board of Trustees shall give notice of the election of said to be held on said day by [given?] having written notices thereof posted up in four public places in said town at least one week previous to said election, & [...?] one of the members of said Board & the Clerk of the Board shall act as inspector & clerk of said election, & shall give certificates of election to the ^five^ persons receiving the greatest number of votes.
[docketing]
A Bill for an act to incorporate the town of Jacksonville
[docketing]
8

A Bill to Incorporate the Town of Jacksonville, and for Other Purposes. [1840-01-20]. /documents/D271553. The Papers of Abraham Lincoln Digital Library.