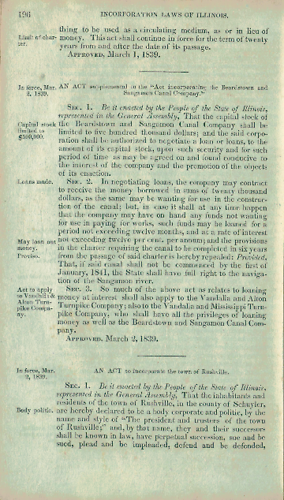 In force, Mar.[March] 2, 1839.
AN ACT supplemental to the “Act incorporating the Beardstown and Sangamon Canal Company.”
1
Capital stock limited to $500,000.
Sec.[Section] 1. Be it enacted by the People of the State of Illinois, represented in the General Assembly, That the capital stock of the Beardstown and Sangamon Canal Company shall be limited to five hundred thousand dollars; and the said corporation shall be authorized to negotiate a loan or loans, to the amount of its capital stock, upon such security and for such period of time as may be agreed on and found conducive to the interest of the company and the promotion of the objects of its enaction.
Loans made.
May loan out money.
Proviso.
Sec. 2. In negotiating loans, the company may contract to receive the money borrowed in sums of twenty thousand dollars, as the same may be wanting for use in the construction of the canal; but, in case it shall at any time happen that the company may have on hand any funds not wanting for use in paying for works, such funds may be loaned for a period not exceeding twelve months, and at a rate of interest not exceeding twelve per cent. per annum; and the provisions in the charter requiring the canal to be completed in six years from the passage of said charter is hereby repealed: Provided, That, if said canal shall not be commenced by the first of January, 1841, the State shall have full right to the navigation of the Sangamon river.
Act to apply toVandalia & Alton Turnpike Company.
Sec. 3. So much of the above act as relates to loaning money at interest shall also apply to the Vandalia and Alton Turnpike Company; also to the Vandalia and Mississippi Turnpike Company, who shall have all the privileges of loaning money as well as the Beardstown and Sangamon Canal Company.
Approved, March 2, 1839.
1On February 11, 1839, William Thomas introduced SB 211 in the Senate. On February 23, the Senate passed the bill without amendment. On March 1, the House took up the bill. Andrew McCormick, representing a select committee, moved to strike out the language of the bill, and offered new language settling accounts with the commissioners of state house. John Dawson, however, moved to table this amendment, which was agreed to by a vote of 35 yeas to 25 nays, with Lincoln voting yea. The House then passed the bill as amended. On March 2, the Senate approved the House amendments. That same day, the Council of Revision approved the bill, and the act became law.
Journal of the House of Representatives, at the First Session of the Eleventh General Assembly, of the State of Illinois (Vandalia, IL: William Waters, 1838), 492, 567, 577-78, 583, 601; Journal of the Senate, at the First Session of the Eleventh General Assembly, of the State of Illinois (Vandalia, IL: William Waters, 1838), 311, 390, 392, 471-72, 496, 506, 512.

An Act Supplemental to "An Act Incorporating the Beardstown and Sangamon Canal Company". [1839-03-02]. /documents/D275382. The Papers of Abraham Lincoln Digital Library.