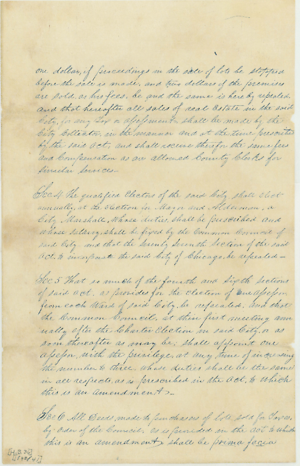 Related Document(s):
An Act to Amend "An Act to Incorporate the City of Chicago," Approved March 4, 1837, and for Other Purposes

. . .one dollar, if proceedings in the sale of lots be stopped before the sale is made, and two dollars if the premises are sold, as his fees, be and the same is hereby repealed, and that hereafter all sales of real Estate in the said City, for any Tax or assessment, shall be made by the City Collector, in the manner and at the time prescribed by the said act, and shall receive therefor the same fees and Compensation as are allowed County Clerks for similar services.
Sec[Section] 4 The qualified Electors of the said City, shall Elect annually, at the Election for Mayor and Alderman, a City Marshall, Whose duties, shall be prescribed and whose salary, shall be fixed by the Common Council of said City, and that the Seventy Seventh Section of the said act, to incorporate the said City of Chicago, be repealed.
Sec 5 That so much of the fourth and sixth sections of said act, as provides for the Election of one assessor from each Ward of said City, be repealed; and that the Common Council, at their first meeting annually after the Charter Election in said City, or as soon thereafter as may be; shall appoint one assessor, with the privilege, at any time of increasing the number to three, whose duties shall be the same in all respects, as is prescribed in the act, to which this is an amendment.
Sec 6 All Deeds, made to purchasers of lots sold for Taxes, by order of the Council, as is provided in the act to which this is an amendment, shall be prima facia
<Page 2>
<Page 3>
. . .acquired by the said deed, without first showing that he, she, or they, or the person under whom he[,] she[,] or they claim title, had title to the land at the time of the sale, or that the title was obtained from the United States or this State after the sale, and that all taxes due upon the lands, have been paid by such person, or the person under whom he claims title as aforesaid.
Sec 7 That the Common Council of the City of Chicago, have power and authority, to inflict such penalties, not inconsistent with the Constitution and laws of this State, as they may deem necessary and Expedient, for a non Compliance with such ordinances as they may pass in relation to the regulating, restraining[,] or licensing the sale of vinous, spiritous[,] or fermented liquors, within the City aforesaid, and also that the said Council, have full and ample power, over the Streets and Alley’s, and public buildings of said City, (Except such as belong to the County of Cook) and to authorize, if they may deem it necessary, the location of any market, or market, buildings in any of the Streets or Alley’s of said City, with power to Establish and regulate the markets so located by such Ordinance or ordinances, for the restraining or licensing of the sale of meats and vegitables therein, as they may deem expedient, with such penalties as they may see proper to affix thereto, for a violation thereof, not inconsistent with the laws and Constitution of this State.
Sec 8 That the Said Common Council, shall have power to assess and levy a tax, upon all improvements on Canal lots, or forfeited Canal lots, as other . . .
<Page 4>
<Page 5>
Sec 10 That the forty first section of the said act to which this is an amendment, or so much thereof as provides that the right of redemption, shall in all cases of sales of real Estate for taxes, Exist to the same Extent to the owner and his creditors, as is allowed by law, in Cases of sale of real Estate for taxes, be so amended as to make the late revenue law, approved February the Twenty-Sixth one thousand Eight hundred and thirty nine, the law, to which reference shall be expressly had in all cases.
Sec 11 That the County Commissioners of Cook County, be and they are hereby authorized to borrow upon the faith and pledge of said County, a sum not Exceeding Ten Thousand Dollars, at a rate of interest not Exceeding Eight per cent, for a term not Exceeding twenty years and to issue bonds therefor under the seal of the County Commissioners Court of said County, and countersigned by the Clerk of the County Commissioners Court, Provided that in no case, shall the said bonds be funded or sold for County orders, unless said County orders shall be at par.
Sec 12 This act to take Effect from and after the first day of March next.
[certification]
02/10/1841
Calhoun, John
Passed House of Rep
Feby 10th 1841
John Calhoun
Clk[Clerk] H of R
[docketing]
No 107 House
[docketing]
A Bill for “an act, to amend, “an act, to incorporate the City of Chicago,” approved the fourth day of March one thousand Eight hundred and thirty seven and for other purposes”
[docketing]
[02]/[18]/[1841]
2
[docketing]
[02]/[24]/[1841]
3.
[docketing]
[02]/[18]/[1841]
Jud[Judiciary]
[docketing]
[02]/[08]/[1841]
Engrossed
[docketing]
4
[docketing]
02/10/1841
passed