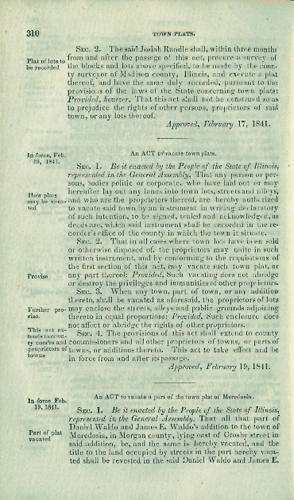 In force, Feb.[February] 19, 1841
An ACT to vacate town plats.
1
How plats may be vacated
Sec.[Section] 1. Be it enacted by the People of the State of Illinois, represented in the General Assembly, That any person or persons, bodies politic or corporate, who have laid out or may hereafter lay out any lands into town lots, streets and alleys, and who are the proprietors thereof, are hereby authorized to vacate said town by an instrument in writing declaratory of such intention, to be signed, sealed and acknowledged, as deeds are, which said instrument shall be recorded in the recorder’s office of the county in which the town it situate.
Proviso.
Sec. 2. That in all cases where town lots have been sold or otherwise disposed of, the proprietors may unite in such written instrument, and by conforming to the requisitions of the first section of this act, may vacate such town plat, or any part thereof: Provided, Such vacating does not abridge or destroy the privileges and immunities of other proprietors.
Further proviso.
Sec. 3. When any town, part of town, or any addition thereto, shall be vacated as aforesaid, the proprietors of lots may enclose the streets, alleys and public grounds adjoining thereto in equal proportions: Provided, Such enclosure does not affect or abridge the rights of other proprietors.
This act extends to county com’rs and proprietors of towns
Sec. 4. The provisions of this act shall extend to county commissioners and all other proprietors of towns, or parts of towns, or additions thereto. This act to take effect and be in force from and after its passage.2
Approved, February 19, 1841.
1In response to several commissions and bills referred to the Committee of the Judiciary relating to the vacation of town plats, Alfred W. Cavalry introduced HB 74 to the House of Representatives on December 30, 1840. The House passed the bill on January 18, 1841. The Senate amended the bill and passed it on February 10. The House passed the amended bill on February 13. The Council of Revision approved the bill on February 19 and the act became law.
Illinois House Journal. 1840. 12th G. A., 163, 182, 191, 240, 369, 390, 438, 442, 443; Illinois Senate Journal. 1840. 12th G. A., 178, 181, 241, 286, 319.
2Illinois experienced a time of intense land speculation in the 1830s that resulted in a number of “paper towns,” settlements that were platted and available for sale but where few or no people actually lived. Many of the proprietors of these settlements abandoned them during and after the Panic of 1837. As a result, the General Assembly received a large number of petitions for vacation during their sessions from 1838 to 1841.
Alasdair Roberts, America’s First Great Depression: Economic Crisis and Political Disorder after the Panic of 1837 (Ithaca, NY: Cornell University Press, 2012), 19, 33, 38; James E. Davis, Frontier Illinois (Bloomington: Indiana University Press, 1998), 210-11; Robert P. Howard, Illinois: A History of the Prairie State (Grand Rapids, MI: William B. Eerdmans, 1972), 196.