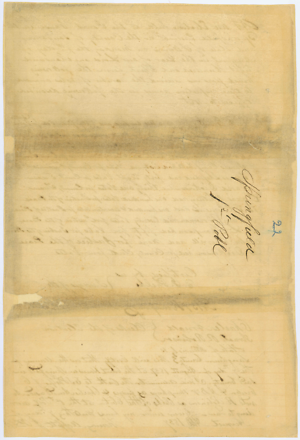 This will Certify that on the Morning of the 7th day of August 1837. at the Court House in Springfield in Said County. I did administer the Oath to E S Phelps, J C Croder & A B V Humphreys as Judges & Charles Arnold and Arnold R Robinson as Clerks of the Election at the 1st Poll according to Law. Given under my hand [& seal?] this 7th day of August AD 1837
Thomas Moffett J P.
<Page 3>
Poll Book
of
An Election held in the Court House in the Springfield
Precinct on Monday the 7th day of August AD 1837
<Page 4>
1“B C” written over “C B”
2“1” written over “2”