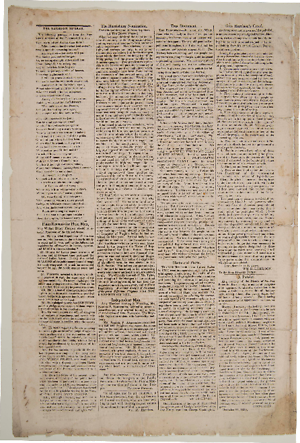 Jacob Reid to the Editors of The Old Soldier, 12 December 1839
A Patriot.
At a meeting of the friends of Mr. Van Buren in Ross county, a number of delegates were appointed to attend a convention to be holden at Columbus, on the 8th of January next, among others, Mr. Jacob Reid, had the honor of being selected.1 The following is his response to the appointment conferred on on him.
Messrs.[Messieurs] Editors:—In looking over the list of delegates to the Convention to be held in Columbus on the 8th of January next, announced in the Advertiser, I find I am honored with an appointment in common with many of my old political friends and neighbors. That I am a Democrat, Messrs. Editors, there is no question, having always voted on that side. I ever intend so doing. I was educated to respect the great apostle of Democracy, Thomas Jefferson, who, I find, placed unbounded confidence in the honest patriotism and fitness of William Henry Harrison for posts of great trust so much so, that he appointed him Governor of the Northwestern Territory, Indian Agent, &c.[etc], and as I am told and verily believe that General Harrison has ever proved himself faithful to his country and the Democratic party, I, and a part of my Democratic friends and neighbors have determined to support him for the Presidency. I therefore wish you, Messrs. Editors, to inform the managers of the Advertiser, that I cannot go up to Columbus on the 8th of January next, as I shall be engaged celebrating that glorious day with my Democratic friends at the Courthouse in Chillicothe, on which occasion I except to see the greatest in-gathering of our farmers and mechanics, that has taken place since the organization of Old Democratic Ross. I shall, however, visit Columbus on the 22d of February next, if selected as one of the Delegates.2
JACOB RIED.December 24, 1639,
1In 1828, supporters of Andrew Jackson in the upcoming presidential election held a convention in Columbus on January 8 to select electors for president and vice-president. They selected January 8 in commemoration of Jackson’s victory at the Battle of New Orleans. Democrats began the tradition of holding biennial conventions on January 8.
Homer J. Webster, History of the Democratic Party Organization in the Northwest, 1824-1840 (Columbus, OH: F. J. Heer, 1915), 23, 53, 106-7.
2The Whig Party held a mass meeting in Columbus on February 21 and 22, 1840, to nominate a gubernatorial candidate and electors for president and vice-president.
Harrison carried Ohio and its twenty-one electoral votes, garnering fifty-four percent of the popular vote.
Dorus M. Fox, History of Political Parties, National Reminiscences and the Tippecanoe Movement (Des Moines, IA: Dorus M. Fox, 1895), 133-40; John L. Moore, Jon P. Preimesberger, and David R. Tarr, eds., Congressional Quarterly’s Guide to U.S. Elections, 4th edition (Washington, DC: CQ Press, 2001), 1:648.