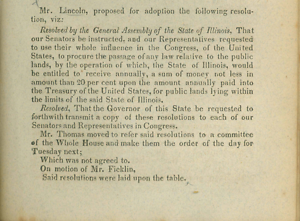 Resolution of the Illinois General Assembly regarding Revenue from the Sale of Public Lands, 10 January 18351
Resolved by the General Assembly of the State of Illinois, That our Senators be instructed, and our Representatives requested to use their whole influence in the Congress, of the United States, to procure the passage of any law relative to the public lands, by the operation of which, the State of Illinois, would be entitled to received annually, a sum of money not less in amount than 20 per cent upon the amount annually paid into the Treasury of the United States, for public lands lying within the limits of the said State of Illinois.
Resolved, That the Governor of this State be requested to forthwith transmit a copy of these resolutions to each of our Senators and Representatives in Congress.
1Abraham Lincoln introduced the resolution in the House of Representatives on January 10, 1835. Jesse B. Thomas Jr. moved that the House refer the resolution to the Committee of the Whole and make it the order of the day for January 13. The House rejected this motion and tabled the resolution.
Illinois House Journal. 1835. 9th G. A., 1st sess., 269.


Printed Document, 1 page(s), Journal of the House of Representatives of the Ninth General Assembly of the State of Illinois (Vandalia, IL: J. Y. Sawyer, 1835), 269.

Resolution of the Illinois General Assembly regarding Revenue from the Sale of Public Lands. [1835-01-10]. /documents/D200046. The Papers of Abraham Lincoln Digital Library.