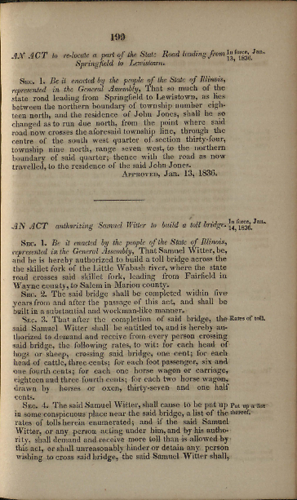 In force, Jan.[January] 13, 1836.
AN ACT to re-locate a part of the State Road leading from Springfield to Lewistown.
1
Sec.[Section] 1. Be it enacted by the people of the State of Illinois, represented in the General Assembly, That so much of the state road leading from Springfield to Lewistown, as lies between the northern boundary of township number eighteen north, and the residence of John Jones, shall be so changed as to run due north, from the point where said road now crosses the aforesaid township line, through the centre of the south west quarter of section thirty-four, township nine north, range seven west, to the northern boundary of said quarter; thence with the road as now travelled, to the residence of the said John Jones.2
Approved, Jan. 13, 1836.
1
2In 1837, the General Assembly passed an act relocating part of this road.
A handwritten version of the petition, dated November 25, 1835, that Lincoln presented in the House is in the Illinois State Archives.

An Act to Re-Locate a Part of the State Road Leading from Springfield to Lewistown. [1836-01-13]. /documents/D200065c. The Papers of Abraham Lincoln Digital Library.