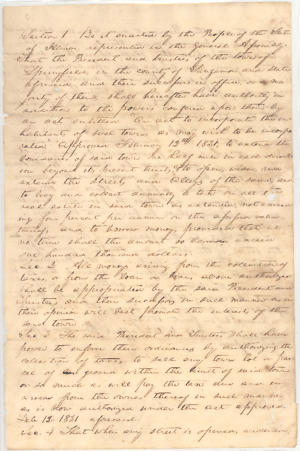 A Bill to Extend Corporate Powers of the President and Trustees of the Town of Springfield, [17 July 1837]1
Section 1. Be it enacted by the People of the State of Illinois represented in the General Assembly: That the President and trustees of the town of Springfield, in the county of Sangamon and state aforesaid, and their successors in office, or a majority of them, shall hereafter have authority in addition to the powers confered upon them by an act entitled “An act to incorporate the inhabitants of such towns as may wish to be incorporated,” Approved February 12th 1831, to extend the boundaries of said town one half mile in each direction beyond it’s present limits, & to open, widen, and extend the streets and Alleys of the same; and to levy and collect annually a tax on all [the?] real estate in said town as extended, not exceeding four percent per annum on the assessed value thereof, and to borrow money, provided that at no time shall the amount so borrowed exceed one hundred thousand dollars.
Sec. 2. All moneys arising from the collection of taxes, or from the loan or loans above authorized shall be appropriated by the said President and Trustees and their successors in such manner as in their opinion will best promote the interests of the said town.
Sec 3. The said President and Trustees shall have power to enforce their ordinances by authorizing the collection of taxes to sell any town lot or parcel of lan ground within the limit of said town or so much as will pay the tax due and in arrear from the owner thereof in such manner as is now authorized under the act approved Feb 12. 1831 aforesaid.
Sec. 4 That when any street is opened, widened,
<Page 2>
or extended, the President and Trustees shall make the person or persons injured thereby, compensation; to ascertain which they shall cause to be summoned twelve good and lawful men, freeholders and inhabitants of said town, not directly interested, who being first duly sworn for that purpose, shall enquire in to and take into consideration, as well the benefit as the injury which may accrue, and estimate and assess the damage sustained by reason thereof, and shall moreover estimate the amount which other persons will be benefited thereby, all of which shall be returned to the board under their hands and seals, and the persons [so?] benefited and assessed shall pay the same in such manner as shall be provided, and the residue if any shall be paid into the town Treasury.
Sec 5. That upon the application of the owners of thi two thirds of the lots on any street or part of a street, it shall be lawful for the President and Trustees to levy and collect a special tax on the owners of the lots on said street or parts of a street according to their respective fronts, for the purpose of grading and paving the streets and side-walks in front thereof
Sec 6 This act to take effect from and after it’s passage.
<Page 3>
<Page 4>
[docketing]
No 4
[docketing]
[...?]
[docketing]
An act to extend the corporate powers of the President & Trustees of the town of Springfield—
[docketing]
[07]/[17]/[1837]
To be Engd[Engrossed]
[docketing]
7
[docketing]
[07]/[17]/[1837]
Engrossed by Wm C Greenup
1Abraham Lincoln wrote the entirety of the bill as well as its title on the back page.
Archer G. Herndon introduced SB 9 in the Senate on July 12, 1837. The Senate passed the bill on July 14. On July 14, the House of Representatives referred the bill to a three-person select committee that included Abraham Lincoln. On behalf of the select committee on July 17, Lincoln reported back this version of the bill without amendment in his handwriting, and the House passed it. On July 20, the Council of Revision approved the bill and the act became law.
Illinois House Journal. 1837. 10th G. A., special sess., 56, 60, 88, 124; Illinois Senate Journal. 1837. 10th G. A., special sess., 43, 45, 50, 72, 109, 115.

A Bill to Extend Corporate Powers of the President and Trustees of the Town of Springfield. [1837-07-17]. /documents/D200110. The Papers of Abraham Lincoln Digital Library.