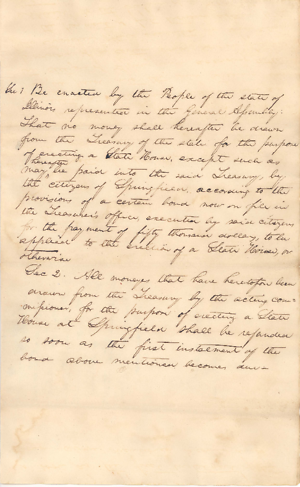 A Bill to Repeal Certain Laws relative to the Permanent Location of the Seat of Government of the State of Illinois, Approved February 25 and March 3, 1837, and for Other Purposes, [19 July 1837]1
^Sec[Section] 1^ Be enacted by the People of the state of Illinois represented in the General Assembly: That no money shall hereafter be drawn from the Treasury of the state for the purpose of erecting a State House, except such as may ^hereafter^ be paid into the said Treasury, by the citizens of Springfield, according to the provisions of a certain bond now on file in the Treasurer's office, executed by said citizens for the payment of fifty thousand dollars, to be applied to the erection of a State House, or otherwise
Sec 2. All moneys that have heretofore been drawn from the Treasury by the acting commissioner, for the purpose of erecting a State House at Springfield shall be refunded so soon as the first instalment of the bond above mentioned becomes due—
<Page 2>
[docketing]
14
[docketing]
15
[docketing]
A Bill for an act to repeal certain Laws relative to the permanent location of the seat of Govenment of the state of Illinois approved Feb the 25th & March [3?]rd 1837 and for other purposes
[docketing]
[07]/[19]/[1837]
Flood, William G.
To be Engrossed
Flood—
1Abraham Lincoln wrote the text of this bill.
On July 11, 1837, William L. D. Ewing introduced HB 11 in the House of Representatives. On July 18, the House referred the bill to the Committee of the Whole, which amended the bill by striking out everything after the enacting clause. The House approved the committee’s amendment by a vote of 52 yeas to 30 nays, with Abraham Lincoln voting yea. The House then referred the bill and proposed amendments to a select committee that included Lincoln. On July 19, the select committee reported back the bill with amendments in Lincoln’s handwriting, which the House approved. The House passed the bill on July 20, and afterwards, on Lincoln’s motion, they changed the title to “A Bill Relative to the Building of a State House at Springfield.” On July 21, the Senate decided against reading the bill a third time, by a vote of 14 ayes to 16 nays. Nothing further was done with the bill.
Illinois House Journal. 1837. 10th G. A., special sess., 21, 48, 102, 103, 104-5, 119, 140; Illinois Senate Journal. 1837. 10th G. A., special sess., 118, 128, 139, 143.

A Bill to Repeal Certain Laws relative to the Permanent Location of the Seat of Government of the State of Illinois, Approved February 25 and March 3, 1837, and for Other Purposes. [1837-07-19]. /documents/D200114. The Papers of Abraham Lincoln Digital Library.