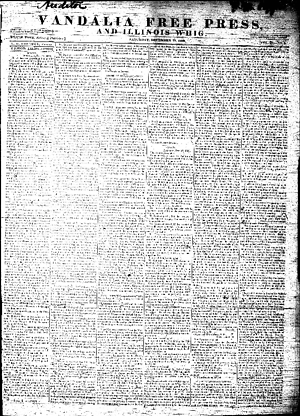 Summary of Legislative Debate on the Repeal of “An Act concerning Judgments and Executions,” 13 December 18381
A motion was made to reconsider the vote upon the resolution offered yesterday by Mr. George Smith, of Madison, for the repeal of so much of the law as authorizes time for redemption upon real estate, after sheriff’s sale, which was agreed to.
Upon the question shall the resolution pass—the ayes and noes were called for—before being taken, Mr. Lincoln rose and said that he hoped the resolution would pass, as it merely proposed an inquiry into the expediency of amending the law—or an examination into the fact whether the present law is defective.
The resolution was amended by striking out the word “repealing” and inserting the word “amended.”
Mr. Baker then spoke in opposition to the resolution, on the ground that it would give too much power to the creditor over those who are strugging[struggling] to secure their homes[.] He was also opposed to this constant spirit of innovation.
Mr. Lincoln replied that he or the gentleman last up was mistaken, and explained his view of the proposed alteration. Under the present law, he said, few appeared at the sale of property, and the judgement creditor usually bids it in at half its value. The owner supposed that he should be able to redeem, but was frequently unable, and his property was thus sacrificed under the operation of this law.
Mr. Baker replied, acknowledging the force of the gentleman’s argument.
Mr. Robert Smith, of Madison, said that he was in favor of the resolution, but should vote against the passage of any bill that might be reported, that made it harder on the creditor than it now was.
The resolution was then amended,2 the call for yeas and nays being withdrawn, and passed.3
1On December 12, 1838, George Smith proposed a resolution, which the House rejected in an unrecorded vote. The resolution read: “Resolved, That the committee on the Judiciary be instructed to inquire into the expediency of repealing so much of the “Act concerning judgments and executions,” approved January 19th, 1825, as makes it lawful for any judgment creditor to redeem lands or tenements that may have been sold by virtue of any execution; and that they report by bill or otherwise.”
“An Act concerning Judgments and Executions” provided for the sale at public auction of a defendant’s personal property to satisfy a court judgment. It allowed a defendant whose property was sold to redeem his property within twelve months of the sale by paying the purchase price plus ten percent interest. Section twelve stipulated that if a defendant failed to redeem his property, any of his judgment creditors were authorized to redeem the property under the same conditions, within fifteen months of the original sale.
“An Act concerning Judgments and Executions,” 17 January 1825, Laws of Illinois (1825), 151-60; Illinois House Journal. 1838. 11th G. A., 1st sess., 63.
2The House further amended the resolution by adding after “execution” the following: “also, so much of the above recited act as requires sheriffs to have real estate valued, and then sell without regard to the valuation.”
Illinois House Journal. 1838. 11th G. A., 1st sess., 80.
3In response to the passed resolution, on December 31, Edwin B. Webb introduced A Bill to Amend an Act, entitled "An Act concerning Judgments and Executions," Approved January 17, 1825, which was passed and became a law.
Illinois House Journal. 1838. 11th G. A., 1st sess., 149.