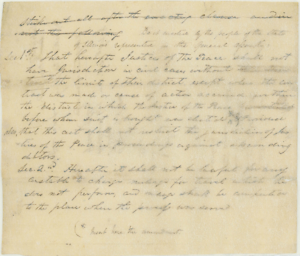 Keyword(s):
Justices of the peace
Constables

Strike out all after the enacting clause and insert the following ^Be it enacted by the people of the State of Illinois represented in the General assembly:^
Sec[Section] 1st That hereafter Justices of the Peace shall not have Jurisdiction in civil cases without the District the limits of their district, except when the contract was made or cause of action accrued within the district in which the Justice of the Peace [was elected?] before whom suit is brought was elected ^*^ Provided ^also,^ that this act shall not restrict the jurisdiction of Justices of the Peace in proceedings against absconding debtors.
Sec. 2.nd Hereafter it shall not be lawful for any Constable to charge mileage for travel which he does not perform, and mileage shall be computed to the place where the process was served
(*Insert here the amendment.
<Page 2>
[docketing]
H R.
[docketing]
No[Number] 113
[docketing]
A Bill for “An Act limiting Justices of the Peace and Constables to their several districts, respectively.
[docketing]
F
[docketing]
2
[docketing]
[01]/29/[1839]
sel. com 5
Flood.
Carpenter
Allen of Greene
Ficklin
Henderson
Green of Clay
[docketing]
[02]/[02]/[1839]
postpone indef[indefinitely]
[docketing]
[01]/29/[1839]
Amdts ^Substitute^ com[committee] Jud[Judiciary].
reported by [Jury?].
Adopted as amended
[&?] refd[referred] sel. com.[select committee] 5

A Bill to Limit Justices of the Peace and Constables to their Several Districts Respectively. [1838-12-14]. /documents/D200145b. The Papers of Abraham Lincoln Digital Library.