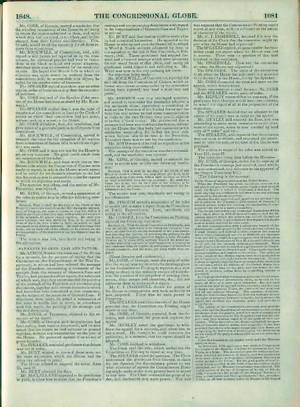 Report of Legislative Proceeding regarding the Printing of a Message of the President, 14 August 1848.
Mr. LINCOLN asked the attention of the House for a moment, for the purpose of saying that the Committee on the Expenditures of the War Department, to whom had been referred the message of the President transmitting a statement of the receipts from the treasury of Generals Cass and Taylor, had prepared a short report, the substance of which was, that they recommended the printing of the message of the President and accompanying documents, together with certain documents which had heretofore been committed to that committee, on the subject of the accounts of General Cass. If objections were made, he asked a suspension of the rules to enable him to move, in accordance with this report, the printing of the message and the said documents.1
1The issue over the pay of Cass and Taylor rose within the context of the presidential campaign of 1848. As the campaign grew more heated, Whigs and Democrats labored to impugn the character of their respective opponents. On June 26 and again on August 3, 1848, Representative Andrew Stewart accused Cass of obtaining $64,865.46 in extra pay while serving in various government offices, in stark comparison to Taylor, who, according to Stewart, received no extra pay. Representative Robert McClelland and other Democrats worked to refute Stewart’s charges and pointed an accusing finger at Taylor, claiming he received over $70,000 in extra pay allowances.
On July 17, 1848, the House of Representatives adopted a resolution calling on President James K. Polk to inform the House how much public money Cass and Taylor had received since their first entrance into public service, distinguishing between regular and extra compensation. On August 11, President Polk submitted the requested materials to the House, and the House referred them to the Committee on the Expenditures of the War Department, of which Abraham Lincoln was a member.
The House refused Lincoln’s motion to suspend the rules. There is a discrepancy between the House Journal and the Congressional Globe on the vote: the House Journal had the vote as seventy-six yeas to seventy-six nays, meaning the motion failed, the necessary two-thirds not voting in favor, while the Congressional Globe recorded the vote as seventy-five yeas and seventy-eight nays.
Andrew Stewart, Gen. Cass’s Extra Pay, $64,865 46--General Taylor Not One Cent: Proved by Documents, Officially Certified and Appended, Speech of Hon. Andrew Stewart, of Penn., Delivered in the House of Representatives, U.S., August 3, 1848 (Washington, DC: J. & G. S. Gideon, 1848); A Refutation of Andrew Stewart’s Fabrication Against General Lewis Cass: A Gross Misrepresentation of the Public Documents, by Andrew Stewart and the Whig Central Committee at Washington, Exposed (Washington, DC: S.N., 1848); U.S. House Journal. 1848. 30th Cong., 1st sess., 63, 1048, 1246-48, 1285; Cong. Globe, 30th Cong., 1st Sess., 1081 (1848); Cong. Globe, 30th Cong., 1st Sess., Appendix, 766-69, 779-81, 1100-1103 (1848); Willard Carl Klunder, Lewis Cass and the Politics of Moderation (Kent, OH: Kent State University Press, 1996), 208.

Report of Legislative Proceeding regarding the Printing of a Message of the President. [1848-08-14]. /documents/D200518. The Papers of Abraham Lincoln Digital Library.