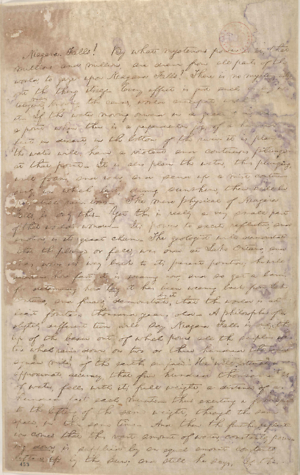 Fragment of Notes Regarding Niagara Falls, [25-30 September 1848]1
. . .Niagara- Falls! By what mysterious power is it, that millions and millions, are drawn from all parts of the world, to gaze upon Niagara Falls? There is, no mystery about the thing itself– Every effect is just such as any inteligent ^man^ knowing the causes, would anticipate, without it– If the water moving onward in a great [river?], reaches a point when there is a perpendicular jog, of a hundred feet in descent, in the bottom of the river,– it is plain the water will have a violent and continuous plunge at that point– It is also plain the water, thus plunging, will foam, and roar, and send up a mist, continuously, in which last, during sunshine, there will be perpetual rain-bows– The mere physical of Niagara Falls, is only this– Yet this is really a very small part of that world's wonder– It's power to excite reflection, and emotion, is it's great charm– The geologist will demonstrate that the plunge or fall, was once at Lake Ontario, and has worn it's way back to it's present position; he will ascertain how fast it is wearing now, and so get a basis for determining how long it has been wearing back from Lake Ontario, and finally demonstrate ^by it^ that this world is at least fourteen thousand years old– A philosopher of a slightly different turn will say Niagara Falls is only the lip of the basin out of which pours all the surplus water which rains down on two or three hundred thousand square miles of the earths surface– He will estimate [with?] approximate accuracy, that five hundred thousand [tons?] of water, falls with it's full weight, a distance of a hundred feet each minute– thus exerting a force equal to the lifting of the same weight, through the same space, in the same time– And then the further reflection comes that this vast amount of water, constantly pouring down, is supplied by an equal amount constantly lifted up, by the sun; and still he says, "If this
<Page 2>
much is lifted up, for this one space of two or three hundred thousand square miles, an equal amount must be lifted for every other equal space; [and?] he is overwhelmed in the contemplation of [the?] vast power the sun is constantly exerting in [the] quiet, noisless opperation of lifting water up [to be?] rained down again–
But still there is more. It calls up the indefinite past– When Columbus first sought this continent– when Christ suffered on the cross– when Moses led Israel through the red Red-Sea– nay, even, when Adam was made, ^first came from the hand of his Maker–^ then as now, Niagara was roaring here– The eyes of that species of extinct giants, whose bones fill the Mounds of America, have gazed on Niagara, as ours do now– Cotemporary with the whole race of man ^men,^, and older than the first man, Niagara is ^strong and^ fresh to-day as ten thousand years ago– The Mammoth and Mastadon– now so long dead, that fragments of their monstrous bones, alone testify, that they ever lived, have gazed on Niagara– In that long– long time, never still for a single moment– Never dried, never froze, never slept, never rested,. . .
1Abraham Lincoln wrote these notes in their entirety. The manuscript ends abruptly with an unfinished sentence.
Editors of early collections of Lincoln papers disagreed over the date and title of this document. John Nicolay and John Hay in the Complete Works of Abraham Lincoln entitled it “Fragment. Notes for a Lecture,” and assigned it the inferred date of July 1, 1850 without attribution. Roy P. Basler, editor of The Collected Works of Abraham Lincoln, and his colleagues rejected Nicolay’s and Hay’s date “because the editors can find no reason for so dating it.” Basler also replaced “Fragment. Notes for a Lecture” with “Fragment: Niagara Falls.” Basler assigned the document the date range of September 25-30, 1848 based on two principal facts: (1) Lincoln visited Niagara Falls en route from Boston to Chicago after completing a speaking tour in Massachusetts on behalf of Zachary Taylor in the presidential election of 1848; (2) the handwriting and paper used appears contemporary with Lincoln letters and speeches written in 1848 while serving in the House of Representatives. The editors have found no evidence to substantiate Nicolay’s and Hay’s date. Various sources claim that Lincoln visited Niagara Falls on his trip from Boston to Chicago, and William H. Herndon recounts a story where he and Lincoln spoke about the experience. The Lincoln Log fixes the date for the visit on September 28, but provides no evidence to substantiate this assertion, so the editors have used Basler’s inferred date.
John G. Nicolay and John Hay, eds., Complete Works of Abraham Lincoln, new and enlarged ed. (New York: Francis D. Tandy, 1905), 2:138-40; Roy P. Basler, ed., The Collected Works of Abraham Lincoln (New Brunswick, NJ: Rutgers University Press, 1953), 2:10-11; The Lincoln Log: A Daily Chronology of the Life of Abraham Lincoln, 28 September 1848, http://www.thelincolnlog.org/Results.aspx?type=CalendarDay&day=1848-09-28; William H. Herndon and Jesse W. Weik, Herndon’s Life of Lincoln (Cleveland, OH: World, 1949), 238-39.