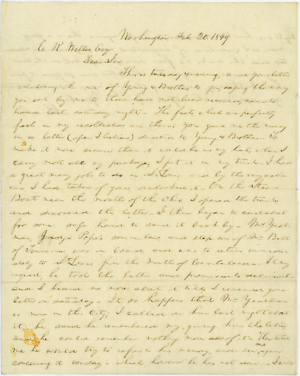 Abraham Lincoln to Charles R. Welles, 20 February 18491
Washington, Feb: 20. 1849.C. R. Welles, Esq.[Esquire]Dear Sir:
This is tuesday evening, and your letter enclosing the one of Young & Brothers to you, saying the money you sent by me to them had not been received, came to hand last saturday night—2 The facts, which are perfectly fresh in my recollection, are these; you gave me the money in a letter (open I believe) directed to Young & Brothers— To make it more secure than it would be in my hat, where I carry most all my packages, I put it in my trunk— I had a great many jobs to do in St Louis; and by the very extra care I had taken of yours, overlooked it— On the Steam Boat near the mouth of the Ohio, I opened the trunk, and discovered the letter— I then began to cast about for some safe hand to send it back by—3 Mr Yeatman, Judge Pope's son-in-law, and step-son of Mr Bell of Tennessee, was on board, and was to return immediately to St Louis, from the mouth of Cumberland—4 At my request, he took the letter and promised to deliver it— and I heard no more about it till I received your letter on saturday— It so happens that Mr Yeatman is now in this City; I called on him last night about it; he said he remembered my giving him the letter, and he could remember nothing more ab of it— He told me he would try to refresh his memory, and see ^me^ again concerning it to-day— which, however he has not done— I will
<Page 2>
try to see him to-morrow and write you again—5 He is a young man, as I understand, of unquestioned, and unquestionable character; and this makes me fear some pick-pocket on the boat may have seen me give him the letter, and slipped it from him— In this way, never seeing the letter again, he would, naturally enough, never think of it again—
Yours trulyA. Lincoln
<Page 3>
<Page 4>
[docketing]
A. Lincoln
Feb[February] 20. 1849
1Abraham Lincoln wrote the body of this letter in its entirety.
2February 17; Charles R. Welles’ letter has not been located.
3In November 1848, Lincoln left Springfield, Illinois, to return to Washington, D.C. He traveled by way of St. Louis and the Ohio River. It appears that Welles gave him the letter and money to deliver to Young & Brothers when he passed through St. Louis.
The Lincoln Log: A Daily Chronology of the Life of Abraham Lincoln, 26 November 1848, http://www.thelincolnlog.org/Results.aspx?type=CalendarDay&day=1848-11-26.
4In The Collected Works of Abraham Lincoln, Roy P. Basler notes that prominent St. Louis businessmen Thomas and James E. Yeatman were brothers that married daughters of Nathaniel Pope and were stepsons of John Bell. James Yeatman married Cynthia Ann Pope in May 1851, however, making it likely that Lincoln is referring to Thomas Yeatman.
Bernard A. Cook, “Yeatman, James Erwin,” American National Biography (New York: Oxford University Press, 1999), 24:123; Roy P. Basler, The Collected Works of Abraham Lincoln (New Brunswick, NJ: Rutgers University Press, 1953), 2:30, n3.
5Lincoln’s letter to Welles, if he wrote one at all, has not been located.