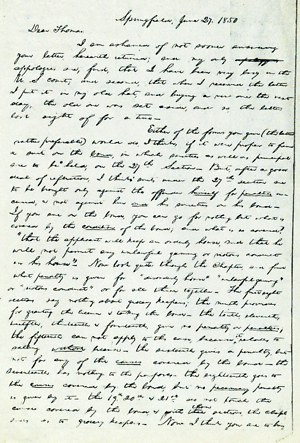 Abraham Lincoln to Richard S. Thomas, 27 June 18501
Springfield, June 27. 1850Dear Thomas:
I am ashamed of not sooner answering your letter, herewith returned; and, my only apologgies appologies are, first, that I have been very busy in the U.S. court; and second, that when I received the letter I put it in my old hat, and buying a new one the next day, the old one was set aside, and so, the letter lost sight of for a time–2
Either of the forms you give (the latter rather preferable) would do, I think, if it were proper to frame a suit on the bond, in which sureties as well as principal are to be held, on the 27th Section– But, after a good deal of reflection, I think suits under the 27th section are to be brought only against the offender himself for penalties incurred, & not against him and his sureties on his bond– If you sue on the bond, you can go for nothing but what is covered by the condition of the bond; and, what is so covered? "that the applicant will keep an orderly house, and that he will not permit any unlawful gaming or riotous conduct in his house"– Now look quite through the Chapter, and find what penalty is given for "disorderly house" "unlawful gaming" or "riotous conduct" or for all three together– The first eight sections say nothing about grocery keepers; the ninth provides for granting the license & taking the bond– the tenth, eleventh, twelfth, thirteenth & fourteenth, give no penalty or penalties; the fifteenth can not apply to this case, because ^it^ relates to selling without license– the sixteenth gives a penalty, but not for any of the causes covered by the bond– the seventeenth has nothing to the purposes– the eighteenth goes to the causes covered by the bond, but no pecuniary penalty is given by it– the 19th 20th & 21st do not touch the causes covered by the bond, & with that ^those^ sections, the chapt[er] ends as to grocery keepers– Now I think you are to bring
<Page 2>
just such a suit on the bond, taken under the ninth section, as you would bring if the 27th section had no existence– 3
Bring the suit in the name of whoever, on the face of the bond, is made the obligee, and for the use of whoever is entitled to the money when collected— that is if the bond is given to the People of the state of Illinois— your first heading, which I mark (A) is right– if the bond is given to an individual, let his name, stand in place of that of the People–
Yours as everA. Lincoln
<Page 3>
SPRINGFIELD Ill.[Illinois]
JUN[June] 28R. S. Thomas, Esq[Esquire]VirginiaCass Co,Illinois–
[docketing]
06/XX/1850
Thomas, Richard S.
A. Lincoln
June '50
Licence bond– form suit &c[etc.]4
1Abraham Lincoln wrote and signed this letter, including the address on the last sheet, which was folded to create an envelope.
2Richard S. Thomas’ letter has not been located.
3Lincoln advised Thomas to file suit under section nine instead of section twenty-seven of the Illinois statute on licenses. Section nine outlined the conditions by which county commissioners’ courts could grant licenses to grocers; section twenty-seven covered how penalties incurred under the statute could be recovered and disposed of.
An Act Regulating Tavern and Grocery License; “Licenses,” 3 March 1845, Revised Statutes of Illinois (1845), 342, 344.
4Thomas wrote this docketing.