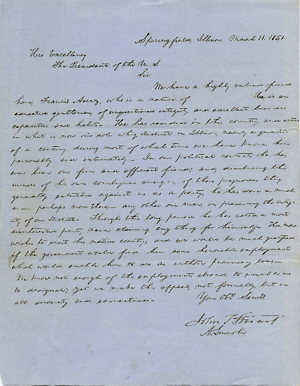 John T. Stuart and Abraham Lincoln to Millard Fillmore, 11 March 18511
Springfield, Illinois, March 11– 1851.His ExcellencyThe President of the U.S.Sir:
We have a highly valued friend here, Francis Arenz, who is a native of2 He is an educated gentleman, of unquestioned integrity, and excellent business capacities and habits– He has resided in this country, and within what is now our sole whig District in Illinois,3 nearly a quarter of a century, during most of which time we have known him personally and intimately– In our political contests he has ever been our firm and efficient friend; and, disabusing the minds of his own countrymen among us, of those prejudices they generally entertain against us as a party, he has done as much as— perhaps more than,— any other one man, in preserving the integrity of our District– Through this long period he has acted a most disinterested part, never claiming any thing for himself– He now wishes to visit his native country; and we would be much gratified if the government would find him some honorable employment which would enable him to do so without pecuniary loss– We know not enough of the employments abroad, to enable us to designate; yet we make this appeal, not formally, but in all sincerity and earnestness–4
Your Obt Servts[Obedient Servants]John T StuartA. Lincoln
<Page 2>
[docketing]
Hon J. T. Stuart.
Hon A Lincoln
1Abraham Lincoln wrote and signed this letter. John T. Stuart also signed this letter. However, neither Lincoln nor Stuart wrote the text in the second image.
2The blank was left unfilled in the original letter, as shown in the first image. Francis Arenz was born in Prussia.
Newton Bateman and Paul Selby, eds., Historical Encyclopedia of Illinois and History of Cass County, ed. by Charles Æ. Martin (Chicago: Munsell, 1915), 2:800.
3In the elections of 1850, Whig candidate Richard Yates leveraged opposition to the Compromise of 1850 to his political advantage, winning a narrow victory over Democratic incumbent Thomas L. Harris. All six of Illinois’ other congressional districts went to Democrats that year. Yates represented Illinois’ Seventh Congressional District in the U.S. House of Representatives from 1851 until 1855.
Howard W. Allen and Vincent A. Lacey, eds., Illinois Elections, 1818-1990 (Carbondale and Edwardsville: Southern Illinois University Press, 1992), 8-9, 126; Biographical Directory of the American Congress 1774-1996 (Alexandria, VA: CQ Staff Directories, 1997), 2099; Michael F. Holt, The Rise and Fall of the American Whig Party: Jacksonian Politics and the Onset of the Civil War (New York: Oxford University Press, 1999), 566-67.
4Arenz was able to return to his native country of Prussia when, in 1852, President Millard Fillmore appointed him bearer of dispatches to the American legations at Berlin and Vienna.
Newton Bateman and Paul Selby, eds., Historical Encyclopedia of Illinois and History of Cass County, ed. by Charles Æ. Martin, 2:801.