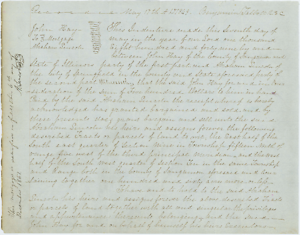 [endorsement]
12/06/1851
Lincoln, Abraham (President)
This mortgage is satisfied in full, this 6th day of December 1851.
A. Lincoln  seal 1
Mortgage Deed of John Hay to Abraham Lincoln, 7 May 18492
This Indenture made this Seventh day of may in the year of our Lord one thousand Eight hundred and forty nine by and between John Hay of the County of Sangamon and State of Illinois party of the first part, and Abraham Lincoln of the City of Springfield in the County and State aforesaid party of the second part– Witnesseth; that the said John Hay for and in consideration of the sum of Five hundred Dollars to him in hand Paid by the said Abraham Lincoln the receipt whereof is hereby acknowledged has granted bargained and sold, and by these presents does grant bargain and sell unto the said Abraham Lincoln his heirs and assigns forever the following described Tracts or parcels of land to wit,– the East half of the South east quarter of Section nine in Township fifteen North of range five west of the third principal Meridian-- and the west half of the South west quarter of section Ten in the same Township and Range both in the County of Sangamon aforesaid and containing together one hundred and sixty acres more or less–3
To have and to hold to the said Abraham Lincoln his heirs and assigns forever the above described Tracts or parcels of land together with all and singular the privileges and appurtenances thereunto belonging=, and the said John Hay for and on behalf of himself his heirs Executors
<Page 2>
Administrators and assigns does covenant to and with the said Abraham Lincoln his heirs Executors administrators and assigns that he is lawfully seized and hath Full right to Convey the above described Tracts of land and every part and parcel thereof and that he will warrant and forever defend the title of the same against the claim or claims of any and all persons whomsoever––
Yet upon this condition that whereas The said John Hay together with Nathaniel Hay has Executed a certain promissory note of even date herewith to the said Abraham Lincoln for the sum of five hundred Dollars payable six months after date with Interest at the rate of six per cent per annum till due and Ten per cent after due until paid– Now if said Note shall Be paid according to its tenor and effect the above Deed is to be void otherwise to remain in full force and effect– In testimony whereof the said John Hay has hereunto set his hand and Seal the day and year first above written.
John Hay
seal
[certification]
05/07/1849
Keyes, James W.
Before me the undersigned a Justice of the peace in and for said County personally came John Hay who is known to me to be the Identical person by whom and in whose name the foregoing Deed was Executed and By whom and in whose name the same is proposed to be acknowledged who then acknowledged that he executed the same freely and voluntarily for the purposes therein expressed– Given under my hand and Seal this 7th day of May AD 1849.
J. W. Keyes JP[Justice of the Peace]
seal 4
[certification]
05/18/1849
Talbott, Benjamin
Recorded May 18th AD 1849–
Benjamin Talbott R– S C[Recorder Sangamon County]5
1Abraham Lincoln wrote and signed this endorsement. Lincoln wrote it vertically in the left margin.
2Benjamin Talbott wrote this deed and signed John Hay’s name.
This entire document is from Sangamon County, Illinois, Deed Book CC. The first page of the document was removed and is now at the Abraham Lincoln Presidential Library and Museum; the second page is in the deed book at the Illinois Regional Archives Depository, University of Illinois, Springfield.
3Located between Springfield and Chatham in what would become Woodside Township.
4Talbott wrote this certification and signed Keyes’ name.
5Talbott wrote and signed this certification.