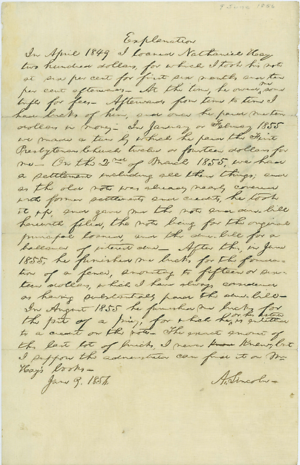 Claim against Estate of Nathaniel Hay, 9 June 18561
Explanation
In April 1849 I loaned Nathaniel Hay two hundred dollars, for which I took his note at six per cent for first six months and ten per cent afterwards– At the time, he owed ^me^ some trifle for fees– Afterwards from time to time I had bricks of him, and once he paid me ten dollars in money– In January or February 1855 we made a turn by which he paid the First Presbyterian Church twelve or fourteen dollars for me– On the 2nd of March 1855, we had a settlement including all these things; and as the old note was already nearly covered with former settlements and credits, he took it up, and gave me the note and due-bill herewith filed, the note being for the original principal loaned, and the due-bill for a ballance of interest due–2 After this, in June 1855, he furnished me bricks for the foundation of a fence, amounting to fifteen or sixteen dollars, which I have always considered as having substantially paid the due-bill– In August 1855 he furnished me bricks for the pit of a privy, for which he ^or his estate^ is entitled to a credit on the note– The exact amount of this last lot of bricks, I never know knew; but I suppose the administrator can find it on Mr Hay's books–3
June 9. 1856.A. Lincoln–
<Page 2>
[docketing]
Abraham Lincoln

[endorsement]
04/10/1857
Allowed
April 10 18575
1Abraham Lincoln wrote and signed this document. Another version of this document is extant, written in an unknown hand.
Nathaniel Hay died on February 4, 1856, and his brother-in-law Joshua F. Amos was appointed an administrator for Hay’s estate.
Daily Illinois State Journal (Springfield), 7 February 1856, 2:4; Harry E. Pratt, The Personal Finances of Abraham Lincoln (Springfield: The Abraham Lincoln Association, 1943), 73.
2Promissory Notes, Document ID: 130072, Lincoln filed claim against Hay's estate, Martha L. Benner and Cullom Davis et al., eds., The Law Practice of Abraham Lincoln: Complete Documentary Edition, 2d edition (Springfield: Illinois Historic Preservation Agency, 2009), http://www.lawpracticeofabrahamlincoln.org/Details.aspx?case=141352.
3The bricks presumably cost $15, the difference between the amount Lincoln requested of $240 and the amount he received of $225.
4An unknown person wrote this docketing.
5An unknown person wrote this endorsement.
Amos paid Lincoln $225 on May 16, 1857. Presumably, the final amount was the amount requested by Lincoln of $240 minus the amount of the note for privy bricks referenced above.