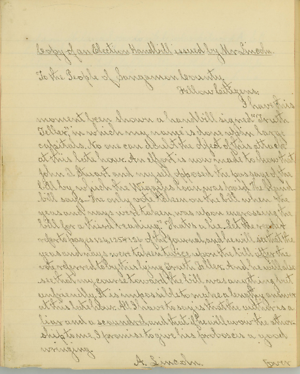 Related Document(s):
Report of Legislative Debate on the State Bank

Abraham Lincoln to the People of Sangamon County, [1836]1
Copy of an Election Handbill issued by Mr Lincoln.
To the People of Sangamon County.Fellow Citizens:
I have this moment been shown a handbill signed “Truth Teller,” in which my name is done up in large capitals. No one can doubt the object of this attack at this late hour. An effort is now made to show that John T. Stuart and myself opposed the passage of the bill by which the Wiggins loan was paid.2 The handbill says—[“]The only vote taken on the bill when the yeas and nays were taken, was upon engrossing the bill for a third reading.” That’s a lie. Let the reader refer to pages 124, 125 & 126 of the Journal, and he will see that the yeas and nays were taken twice upon the bill after the vote referred to by this lying Truth Teller. And he will also see that my course toward the bill was anything but unfriendly. It is impossible to make a lengthy answer at this late hour. All I have to say is that the author is a liar and a scoundrel, and that if he will avow the athorship to me, I promise to give his proboscis a good wringing.3
A. Lincoln.
<Page 2>
P. S. A printed copy of the above handbill was found among the old papers of the late Archer G. Herndon, of Springfield. It is without date, but was probably issued on the eve of the election in 1836.
1This is a handwritten transcription of a document Lincoln apparently distributed as a handbill during the time preceding his election on August 1 to the Tenth General Assembly, which convened December 5.
Theodore C. Pease, ed., Illinois Election Returns, 1818-1848, vol. 18 of Collections of the Illinois State Historical Library (Springfield: Illinois State Historical Library, 1923), 299.
2In 1831, the General Assembly had authorized borrowing $100,000 from Samuel Wiggins to replenish the school fund, from which the legislature had borrowed to pay state expenses, and to redeem State Bank of Illinois bank notes, which the state had purchased at a heavy discount and which became due in 1831 at face value in specie. Section four of the bill required the State Bank of Illinois to redeem the loan.
Reg Ankrom, Stephen A. Douglas: The Political Apprenticeship, 1833-1843 (Jefferson, NC: McFarland, 2015), 79-80.
3The vote engrossing the bill for a third reading occurred on December 18, 1835. Lincoln references votes taken on December 22, right before the bill passed the House. In the first vote, the House of Representatives rejected Lincoln’s amendment to the bill. The second saw the House reject another amendment to the bill. Lincoln voted against engrossing the bill for a third reading. The House Journal does not record his vote on the bill’s passage.
Illinois House Journal. 1835. 9th G. A., 2nd sess., 108, 124-26.