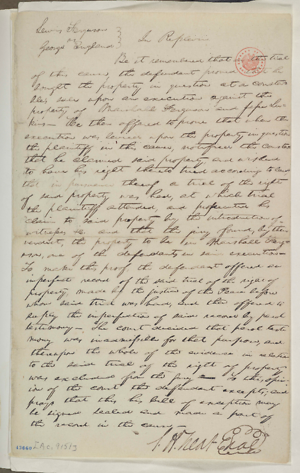 Bill of Exceptions in Ferguson v. England, June 18401
Be it remembered that on the trial of this cause, the defendant proved that he bought the property in question at a constable’s sale upon an execution against the property of Marshall Ferguson and Jesse Lukins— He then offered to prove that when the execution was levied upon the property in question the plaintiff in this cause, notified the consta[ble] that he claimed said property, and wished to have his right thereto tried according to law; that in pursuance thereof a trial of the right of said property was had, at which trial the plaintiff attended, and prossecuted his claim to said property by the introduction of witnesses &c.[etc.] and that the jury found, by their verdict, the property to be in Marshall Ferguson, one of the defendants in said execution— To make this proof, the defendant offered an imperfect record of the said trial of the right of property, made by the justice of the Peace before whom said trial was had, and then offered to suply the imperfection of said record by parol testimony—3 The court decided that parol testimony was inadmissible for that purpose, and thereupon the whole of the evidence in relation to the said trial of the right of property was excluded from the jury— To this opinion of the court the defendant excepts; and prays that this his bill of exception may be signed sealed and made a part of the record in the cause—
S. H. Treat
seal
<Page 2>
[docketing]
Lewis Ferguson Senr[Senior]
VS. George England
[docketing]
Bill of Exceptions4
1Abraham Lincoln wrote the entirety of the bill of exceptions, but Samuel H. Treat signed his own name.
2Lincoln represented George England in Menard County Circuit Court when Lewis Ferguson accused England of stealing a mare and colt valued at $39. The action of replevin gave individuals legal remedy for instances of wrongful seizure of their personal property. After the jury found England guilty of wrongfully taking the horses, Lincoln prepared this bill of exceptions for an appeal. However, England paid the court costs and likely returned the animals, and Lincoln never filed an appeal of the case in the Illinois Supreme Court.
Ferguson v. England, Martha L. Benner and Cullom Davis et al., eds., The Law Practice of Abraham Lincoln: Complete Documentary Edition, 2d edition (Springfield: Illinois Historic Preservation Agency, 2009), http://www.lawpracticeofabrahamlincoln.org/Details.aspx?case=135037.
3Parol testimony is when evidence is verbally provided in court.
John Bouvier, A Law Dictionary Adapted to the Constitution and Laws of the United States of America, (Philadelphia: Childs & Peterson, 1856), 2:281.
4A bill of exceptions is a list of written objections to a trial judge's rulings or instructions, which the trial judge had to sign. An attorney would use this document to prepare an assignment of errors necessary for filing an appeal of a case to a higher court.
Glossary, Martha L. Benner and Cullom Davis et al., eds., The Law Practice of Abraham Lincoln: Complete Documentary Edition, http://www.lawpracticeofabrahamlincoln.org/Reference.aspx?ref=Reference html files/Glossary.html.