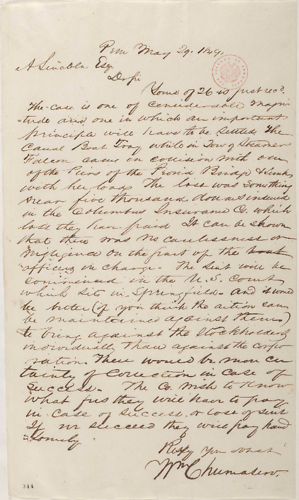 William C. Chumasero to Abraham Lincoln, 29 May 18491
Peru May 29, 1849,A Lincoln Esqr[Esquire]Dr[Dear] Sir
Yours of 26 is just recd[received]2 The case is one of considerable magnitude and one in which an important principle will have to be settled The Canal Boat Troy while in Tow of Steamer Falcon came in collision with one of the Piers of the Peoria Bridge & sunk with her load3 The loss was something near five thousand dollars insured in the Columbus Insurance Co. which loss they have paid It can be shown that there was no carelessness or negligence on the part of the boat officers in charge– The suit will be commenced in the U.S. Court which sits in Springfield– and it would be better (if you think the action can be maintained against them) to bring against the stockholders individually than against the corporation– There would be more certainty of correction in case of success– The Co.[Company] wish to know what fees they will have to pay in case of success– or loss of suit If we succeed they will pay handsomely–4
Respy[Respectfully] your obt st[obedient servant]Wm Chumasero–
1William C. Chumasero wrote and signed this letter.
2On May 22, Chumasero wrote Abraham Lincoln inquiring if Lincoln would be available to assist him in a lawsuit by the Columbus Insurance Company against the Peoria Bridge Company/Association. Lincoln responded to Chumasero on May 26. Lincoln’s letter is not extant, but he apparently expressed interest in the case, because Chumasero writes offering its particulars.
3The accident occurred on March 22, 1849.
Columbus Insurance Co. v. Peoria Bridge Co., Martha L. Benner and Cullom Davis et al., eds., The Law Practice of Abraham Lincoln: Complete Documentary Edition, 2d edition (Springfield: Illinois Historic Preservation Agency, 2009), Document ID: 129720, http://www.lawpracticeofabrahamlincoln.org/Details.aspx?case=140936.
4The insurance company retained Lincoln and Chumasero and sued Alfred G. Curtenius and other stockholders of the Peoria Bridge Company/Association in the United States Circuit Court, District of Illinois. Lincoln and Chumasero apparently brought an action of trespass against the Peoria Bridge Company/Association to recover damages. Arguments began in late 1851. Arguing on behalf of the plaintiffs, Lincoln and Chumasero claimed that the piers were an obstruction to river navigation. Lawyers for Curtenius and others pled that the Illinois General Assembly authorized the construction of the bridge, therefore protecting them from liability. The insurance company demurred to the plea, arguing that the General Assembly, in enacting the law creating the Peoria Bridge Company, did not possess authority to create obstructions to the navigation of the Illinois River. The court sustained the demurrer, ruling that Curtenius and others should have claimed that the bridge was not an obstruction. The parties agreed to substitute the Peoria Bridge Company/Association as defendants for Curtenius and others. The bridge company/association pleaded again. The jury was unable to agree on a verdict. The parties reached an agreement, and the court dismissed the case in July 1854.
Columbus Insurance Co. v. Peoria Bridge Co., Martha L. Benner and Cullom Davis et al., eds., The Law Practice of Abraham Lincoln: Complete Documentary Edition, Document ID: 129719, http://www.lawpracticeofabrahamlincoln.org/Details.aspx?case=140936.