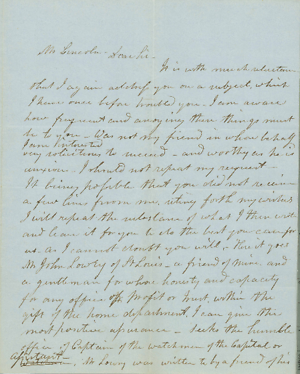 Tarrant A. Perkins to Abraham Lincoln, [May-December 1849]1
Mr Lincoln–Dear Sir–
It is with much reluctance that I again address you on a subject, which I have once before troubled you– I am aware how frequent and anoying these things must be to you– Was not my friend in whose behalf ^I am interested^ very solicitrous to succeed– and worthy as he is anxious– I should not repeat my request– It being possible that you did not receive a few lines from me, seting forth my wishes I will repeat the substance of what I then wrote and leave it for you to do the best you can for us– as I cannot doubt you will,– Here it goes Mr John Lowry of St Louis– a friend of mine– and a gentleman for whose honesty and capacity for any office of profit or trust, within the gift of the home department, I can give the most positive assurance– seeks the humble office of Captain of the watchmen of the Capital or Watchman, ^Assistant^– Mr Lowry was written to by a friend of his
<Page 2>
<Page 3>
in the City of Washington, advising him among others– to procure a letter from you or any other prominent Whigs in Illinois to Mr Ewing or any other influential men at Washington– recomending him as suitable &c[etc] for such a situation– Now if you can through me and others who may have addressed you on the same subject, give me such a letter as will so aid him, you will greatly oblige
yours trulyT A Perkins
Messrs[Messieurs] Munn & Willard may have written to you on this subject–2 If so– you may if you think proper, enclose the letter to me and I will inform them of it
Mr Baker has promised me a letter after a while– house proceedings which I do not understand– causes him to decline at this present–3
1Tarrant A. Perkins wrote and signed this letter and wrote the postscript.
The actual date of this letter is unknown, but there is strong evidence that Perkins wrote it during the intense competition for patronage that dominated the first nine months of the presidency of Zachary Taylor. On May 4, 1849, Perkins first wrote Abraham Lincoln regarding John Lowry, and Edward D. Baker wrote Lincoln on June 8 regarding Perkins’ advocacy for Lowry, admitting that he could not “at the present moment ask anything” of President Taylor and his administration and suggesting that Lincoln might be more fortunate. Lincoln endorsed Perkins’ letter, and apparently sent it and other letters to Secretary of the Interior Thomas Ewing. Lincoln’s endorsement is undated, but docketing on the letter indicates that the U.S. Department of the Interior received the letter on or before June 23. Lincoln received no further correspondence on Lowry, and if he wrote another letter of recommendation, it is not extant. Perkins’ reference to Baker and “house proceedings” suggests that the U.S. House of Representatives, of which Baker was a member, was either already in session or preparing to begin its session. Lincoln’s correspondence indicates that the scramble for patronage receded as the opening of Congress approached, and the Thirty-First Congress convened on December 3, 1849, so editors believe that Perkins wrote the letter between May 5 and December 3, 1849.
Michael F. Holt, The Rise and Fall of the American Whig Party: Jacksonian Politics and the Onset of the Civil War (New York: Oxford University Press, 1999), 414-19; Elbert B. Smith, President Zachary Taylor: The Hero President (New York: Nova History, 2007), 169-70; U.S. House Journal. 1849. 31st Cong., 1st sess., 3.
2Munn could not be positively identified. No letter from Alexander P. Willard has been located.
3Lowry does not appear in the official registers of the officers and agents of the federal government for 1849, 1851, and 1853, so apparently he did not receive an appointment.
Register of all Officers and Agents, Civil, Military, and Naval, in the Service of the United States, on the Thirtieth September, 1849 (Washington, DC: Gideon, 1849); Register of all Officers and Agents, Civil, Military, and Naval, in the Service of the United States, on the Thirtieth September, 1851 (Washington, DC: Gideon, 1851); Register of Officers and Agents, Civil, Military, and Naval, in the Service of the United States, on the Thirtieth September, 1853 (Washington, DC: Robert Armstrong, 1853).