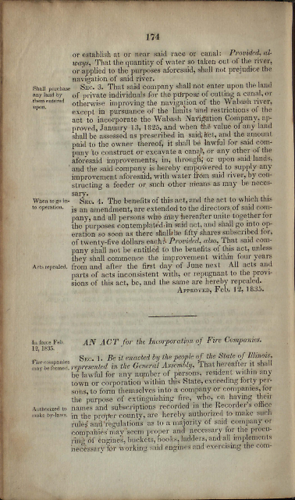 Related Document(s):
A Bill for the Incorporation of Fire Companies

In force Feb.[February] 12, 1835.
AN ACT for the Incorporation of Fire Companies.
1
Fire companies may be formed.
Authorized to make by-laws.
Proviso.
Sec.[Section] 1. Be it enacted by the people of the State of Illinois, represented in the General Assembly, That hereafter it shall be lawful for any number of persons, resident within any town or corporation within this State, exceeding forty persons, to form themselves into a company or companies, for the purpose of extinguishing fire, who, on having their names and subscriptions recorded in the Recorder’s office in the proper county, are hereby authorized to make such rules and regulations as to a majority of said company or companies may seem proper and necessary for the procuring of engines, buckets, hooks, ladders, and all implements necessary for working said engines and exercising the com-
<Page 2>
panies: Provided, no by-law shall be contrary to the laws of this State.
Declared bodies politic and corporate.
Style.
Sec. 2. So soon as such persons shall have had their names and subscriptions recorded as aforesaid, they and their successors shall be, in law and in fact, a body corporate and politic, to have continuance forever, by the name and style of “The Fire Company;” and by such corporate name and style, shall be forever able and capable, in law and in equity, to sue and be sued, implead and be impleaded, answer and be answered, defend and be defended, in all manner of suits, actions, plaints, pleas, causes, matters, and demands of whatever kind and nature they may be, in as full and effectual a manner, as any person or persons, bodies corporate and politic may or can do.
Fines and forfeitures how recovered.
Sec. 3. All fines and forfeitures, for non-attendance or delinquency imposed by the by-laws and regulations to be adopted by the companies provided for by this act, not exceeding twenty dollars, shall be recoverable by action of debt, before any justice of the peace of the proper county, by the said company, in their corporate capacity, which said fines and forfeitures, shall be for the use of the company suing for the same.
Exempted from militia duty.
Sec. 4. All persons who shall form themselves into fire companies, as is provided in the first section of this act, shall be exempt from militia duty during the time they belong to such company; and all persons who shall have served twelve years in succession in any such fire company, shall, forever after, be exempt from doing militia duty in this State, except in time of war.2
This act to be in force and take effect from and after its passage.3
Approved, Feb. 12, 1835.
1On January 19, 1835, the House of Representatives passed a resolution authorizing the Committee on Propositions and Grievances to discuss the necessity of establishing fire companies in the State. From that committee, Stinson H. Anderson introduced HB 161 in the House on January 27, 1835. On January 29, the House referred it to a select committee. The select committee reported back the bill on January 30 with an amendment, in which the House concurred. The House passed the bill as amended on February 2. The Senate concurred on January 9. On February 12, the Council of Revision approved the bill, and the act became law.
Journal of the House of Representatives of the Ninth General Assembly of the State of Illinois, at their First Session, Begun and Held in the Town of Vandalia, December 1, 1834 (Vandalia, Ill.: J. Y. Sawyer, 1835), 325, 393, 434, 441, 469-70, 513, 539, 550; Journal of the Senate, of the Ninth General Assembly of the State of Illinois, at their First Session, Begun and Held in the Town of Vandalia, December 1, 1834 (Vandalia, Ill.: J. W. Sawyer, 1835), 404, 415, 469, 503, 508.
2Illinois law required all free, white males from the ages of eighteen to forty-five who were of able body to serve in the state militia should the governor call up a militia for state defense in the time of a crisis. When the governor of the state called the militia into service, the law required all eligible men to serve. The exemption from militia service of fire company members was not the only exemption, as Illinois law at this time also exempted religious conscientious objectors and prison wardens and workers.
“An Act for the Organization and Government of the Militia of this State,” 2 March 1833; “An Act to Amend An Act, Entitled ‘An Act relative to Criminal Jurisprudence,’ Approved, January 6, 1827, and to Provide for the Regulation and Government of the Penitentiary,” 15 February 1831, both in The Revised Laws of Illinois (1839), 469, 476.
3This was the first legislation in Illinois regulating the formation of community fire companies.
“Fire Companies,” The Public and General Statute Laws of the State of Illinois (1839), 312.