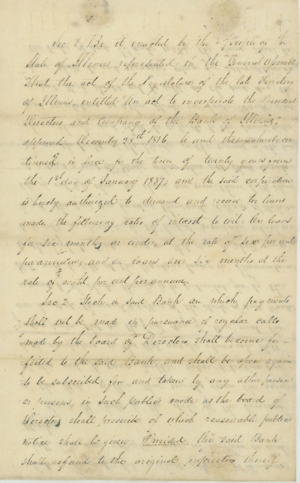 Related Document(s):
An Act to Extend for a Limited Time the Charter of the Bank of Illinois at Shawneetown

Sec[Section] 1 Be it enacted by the people of the State of Illinois represented in the General Assembly; That the act of the Legislature of the late Territory of Illinois, entitled “An act to incorporate the President Directors and Company of the Bank of Illinois,” approved December 28th 1816, be and the ^same is^ hereby continued in force for the term of twenty years from the 1st day of January 1837; and the said corporation is hereby authorized to demand and receive, for loans made, the following rates of interest to wit: On loans for six months or under, at the rate of six per cent per annum; and on loans over six months at the rate of eight per cent per annum.
Sec 2 Stock in said Bank, on which payments shall not be made in pursuance of regular calls made by the board of Directors, shall become forfeited to the said Bank, and shall be open again to be subscribed for and taken by any other person or persons, in such public mode as the board of Directors shall prescribe, of which reasonable public notice shall be given Provided the said Bank shall refund to the original proprietors thereof
<Page 2>
whatever amount (but without interest or dividends) shall have been actually paid in by them, on such stock.
Sec 3 It shall be the duty of the Governor of this State, within three months from the passage of this act, to cause public notice to be given in such newspapers in this State, and else where; as he shall judge proper, that on the first day of May next, the one hundred thousand dollars of the stock of said Bank reserved by the charter thereof to be subscribed for by the State, will be sold at the Banking-house in Shawneetown to the highest bidder; and on that day he shall cause to be sold as aforesaid, for the highest premium which can be got, the said one hundred thousand dollars of stock in lots of not less than ten shares, nor more than fifty shares at a time; and the ^said^ stock, when thus sold, shall be entered on the books of the Bank, in the names of the purchasers thereof, and shall be subject to the same rules and regulations as other stock in Said Bank, and if said stock should not be sold on the said day, the same shall be and remain open for subscription on the books of said Bank until the same shall be
<Page 3>
all subscribed for and taken. The premium for which said stock shall be sold, shall be paid into the State Treasury for the use of the people of the State.
<Page 4>
[docketing]
Senate
A Bill entitled An act to extend, for a limited time, the charter of the Bank of Illinois at Shawneetown
[docketing]
[02]/[12]/[1835]
White, Leonard
To be enrolled
Sec. Senate
[docketing]
[01]/[26]/[1835]
Engrossed.
[docketing]
Gatewood
Maxwell
Williamson
[docketing]
lay Table.

A Bill to Extend for a Limited Time the Charter of the Bank of Illinois at Shawneetown. [1835-02-09]. https://papersofabrahamlincoln.org/documents/D251534. The Papers of Abraham Lincoln Digital Library.