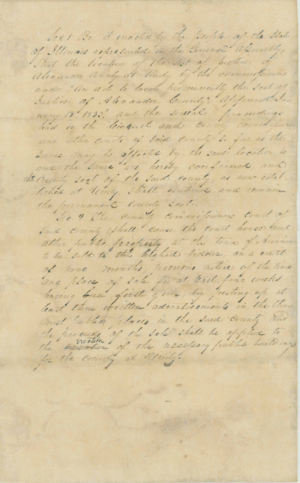 Related Document(s):
An Act Supplemental to "An Act to Locate Permanently the Seat of Justice of Alexander County," Approved January 18, 1833

Sec[Section] 1 Be it enacted by the people of the State of Illinois represented in the General Assembly; That the location of the seat of Justice of Alexander County at Unity by the commissioners under “An act to locate permanently the seat of Justice of Alexander County”, approved January 18. 1833.” and the several proceedings had in the Circuit and county commissioners and other courts of said county, so far as the same may be affected by the said location, be and the same are hereby confirmed, and ^the^ county seat of the said county, as now established at Unity, shall continue and remain the permanent county seat.
Sec. 2. The county commissioners court of said county shall cause the court house and other public property at the town of America, to be sold to the highest bidder, on a credit of nine months, previous notice of the time and place of sale for at least four weeks having been first given, by posting up at least three written advertisements in the three most public places in the said county and the proceeds of the sale shall be applied to the creation ^erection^ of the necessary public buildings for the county at Unity.
<Page 2>
[docketing]
Senate
A Bill entitled an act supplemental to “an act to locate permanently the seat of Justice of Alexander County.” approved Jany.[January] 18th 1833.”
[docketing]
[01]/[07]/[1835]
2
[docketing]
[01]/[07]/[1835]
Engrossed
[docketing]
[01]/[24]/[1835]
White, Leonard
To be enrolled
Sec. Senate

A Bill Supplemental to "An Act to Locate Permanently the Seat of Justice of Alexander County," Approved January 18, 1833. [1835-01-15]. https://papersofabrahamlincoln.org/documents/D251542. The Papers of Abraham Lincoln Digital Library.