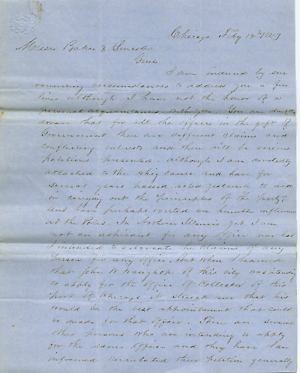 Arnold Bigelow to Edward D. Baker and Abraham Lincoln, 12 February 18491
Chicago Feby 12th 1849Messrs[Messieurs] Baker & LincolnGents
I am induced by surrounding circumstances to address you a few lines although I have not the honor of a personal acquaintances with you. You are doubtless aware that for all the offices in the gift of Government there are different claims and conflicting interests and there will be various petitions presented. Although I am devotedly attached to the Whig cause and have for several years passed acted zealously to aid in carrying out the principles of the party; and have perhaps exerted an humble influence at the Poles[Polls]. In Northern Illinois yet I am not an aspirant for any office nor had I intended to advocate the claims of any person for any office. But when I learned that John W Waughop of this city was intending to apply for the office of Collector of this port of Chicago it struck me that his would be the best appointment that could be made for that office. There are several other persons who are intending to apply for the same office and they have I am informed circulated their petition generally
<Page 2>
and will each make the best possible effort. I have no doubt that if Mr Waughop had commenced making preperations a little sooner he could have had the influence of a majority of the Whigs in the city– In proof of the last statement you will receive a number of letters from distinguished Whigs who had been solicited and had signed in favor of others before knowing that Mr John W Waughop was an applicant.2 He is decidedly their choice and I am postively of the opinion that the appointment of Mr Waughop would give the most general satisfaction of any one who could be mentioned– Mr Waughop is a gent with whom I have been acquainted for a number of years and know him to be a devoted Whig and a person well qualified to fill the office. Mr Waughop came to this city six years since from Tazwell Co. Ill., a young man without means and a perfect stranger and by his own industry and perseverance has become a member of the Chicago Bar, and he should be countenanced and assisted & I firmly believe that his appointment would give ^as^ general satisfaction as any person that could be selected, by accomplishing this appointment which I believe to be in your power you will do very acceptable service to
<Page 3>
the Whig friends of this section as well as rendering assistance to Real Worth you will receive letters from several Gentlemen of distinction in Mr Waughop’s favor, even after they had either promised their support or signed petition for others, Which is positive proof of Mr Waughop’s being their first choice although Gentlemen I presume there will be individuals in person at Washington sent on purpose to advocate the claims of others and perhaps claim something for themselves and they may be Orators even, however all we ask Gents is your influence in favor of a Deserving and Worthy man and our object and the best interest of the Whig Party are advanced
I am gent Your Very humble & obedient servantA BigelowTo the Honorable,
Messrs Baker & LincolnP S Gent should there be any thing more wanting in your estimation or any thing that you can suggest that the real Whigs, that ask no office and that are Whigs from a love of Truth, can do to aid real worth send at once such suggestions and we will not be wanting in furnishing any thing–
Inclosed you have a letter of introduction from J Young Scammon Esq[Esquire] the object of which
<Page 4>
is only to show you that my representations are to be headed[heeded], in full hope and expectation of the entire object of my letter to you being ultimately accomplished3I am Most Respectfully
Yours &C[etc.]A BigelowMessrs A Lincoln & E D BakerWashington CityD.C.4
[docketing]
1849
John W. Waughop for Collector
Chicago Ill.[Illinois]
1Arnold Bigelow wrote the body of the letter and the address on the fourth page.
2William H. Brown and J. Young Scammon endorsed John W. Waughop for the position, though Scammon had already signed a petition in favor of Jacob Russell.
Alfred Cowles to Edward D. Baker and Abraham Lincoln.
3Scammon’s letter has not been located.
4Waughop did not get the appointment; Jacob Russell received the job, holding the position until 1853.
Register of all Officers and Agents, Civil, Military, and Naval, in the Service of the United States, on the Thirtieth September, 1849 (Washington, DC: Gideon, 1849), 107; Register of all Officers and Agents, Civil, Military, and Naval, in the Service of the United States, on the Thirtieth September, 1851 (Washington, DC: Gideon, 1851), 110; Register of Officers and Agents, Civil, Military, and Naval, in the Service of the United States, on the Thirtieth September, 1853 (Washington, DC: Robert Armstrong, 1853), 125.