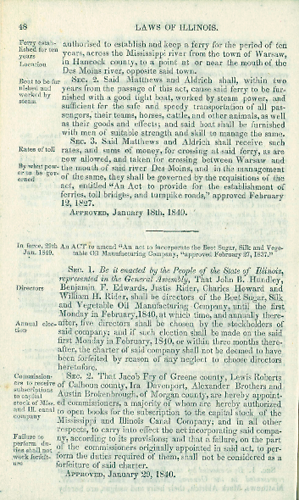 In force, 29th Jan.[January] 1840.
An ACT to amend “An act to incorporate the Beet Sugar, Silk and Vegetable Oil Manufacturing Company,[”] “approved February 27, 1837.”
1
Directors
Annual election
Sec.[Section] 1. Be it enacted by the People of the State of Illinois, represented in the General Assembly, That John B. Hundley, Benjamin F. Edwards, Justis Rider, Charles Howard and William H. Rider, shall be directors of the Beet Sugar, Silk and Vegetable Oil Manufacturing Company, until the first Monday in February, 1840, at which time, and annually thereafter, five directors shall be chosen by the stockholders of said company; and if such election shall be made on the said first Monday in February, 1840, or within three months thereafter, the charter of said company shall not be deemed to have been forfeited by reason of any neglect to choose directors heretofore.2
Commissioners to receive subscriptions to capital stock ofMiss. and Ill. canal company
Failure to perform duties shall not work forfeiture
Sec. 2. That Jacob Fry of Greene county, Lewis Roberts of Calhoun county, Ira Davenport, Alexander Brothers and Austin Brokenbrough, of Morgan county, are hereby appointed commissioners, a majority of whom are hereby authorized to open books for the subscription to the capital stock of the Mississippi and Illinois Canal Company; and in all other respects, to carry into effect the act incorporating said company, according to its provisions; and that a failure, on the part of the commissioners originally appointed in said act, to perform the duties required of them, shall not be considered as a forfeiture of said charter.3
Approved, January 29, 1840.
1On December 19, 1839, George Churchill introduced SB 19 in the Senate. On December 27, the Senate passed the bill. On January 2, 1840, the House of Representatives referred the bill to a select committee. On January 3, the select committee reported back the bill with an amendment, in which the House concurred. The House passed the bill as amended. On January 27, the Senate concurred in the House amendment. On January 29, the Council of Revision approved the bill, and the act became law.
Illinois House Journal. 1839. 11th G. A., special sess., 95, 118-19, 122, 263; Illinois Senate Journal. 1839. 11th G. A., special sess., 34, 50, 61, 85, 183, 185, 203-04.
2Hundley and Edwards were among the original directors in the incorporation act.
3On January 3, 1839, the House of Representatives amended the bill by adding this section. Section four of the incorporation act listed the commissioners appointed to open books for the subscription of the capital stock.
Illinois House Journal. 1839. 11th G. A., special sess., 122.