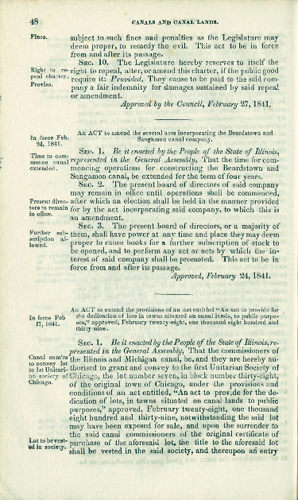 Related Document(s):
A Bill to Amend the Several Acts Incorporating the Beardstown and Sangamon Canal Company

In force Feb. [February]24, 1841.
An ACT to amend the several acts incorporating the Beardstown and Sangamon canal company.
1
Time to commence canal extended.
Sec. [Section]1. Be it enacted by the People of the State of Illinois, represented in the General Assembly, That the time for commencing operations for constructing the Beardstown and Sangamon canal, be extended for the term of four years.
Present directors to remain in office.
Sec. 2. The present board of directors of said company may remain in office until operations shall be commenced, after which an election shall be held in the manner provided for by the act incorporating said company, to which this is an amendment.
Further subscription allowed.
Sec. 3. The present board of directors, or a majority of them, shall have power at any time and place they may deem proper to cause books for a further subscription of stock to be opened, and to perform any act or acts by which the interest of said company shall be promoted. This act to be in force from and after its passage.
Approved, February 24, 1841.
1John Bennett introduced HB 198 to the House of Representatives on February 4, 1841. The House passed the bill on February 10. The Senate passed the bill on February 13. The Council of Revision approved the bill on February 24 and the act became law.
Journal of the House of Representatives of the Twelfth General Assemble (Springfield, IL: William Walters, 1840), 325, 338, 349, 361, 404, 469, 476, 492; Journal of the Senate of the Twelfth General Assembly (Springfield, IL: William Walters, 1840), 289, 307, 314.

An Act to Amend the Several Acts Incorporating the Beardstown and Sangamon Canal Company. [1841-02-24]. /documents/D283728b. The Papers of Abraham Lincoln Digital Library.