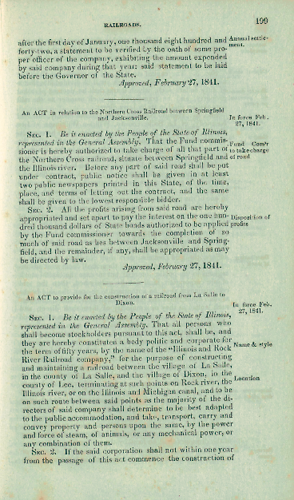 Related Document(s):
A Bill in relation to the Northern Cross Railroad between Springfield and Jacksonville

In force Feb.[February] 27, 1841.
An ACT in relation to the Northern Cross Railroad between Springfield and Jacksonville.
1
Fund Com’r[Commissioner] to take charge of road
Sec.[Section] 1. Be it enacted by the People of the State of Illinois, represented in the General Assembly2, That the Fund commissioner is hereby authorized to take charge of all that part of the Northern Cross railroad, situate between Springfield and the Illinois river. Before any part of said road shall be put under contract, public notice shall be given in at least two public newspapers printed in this State, of the time, place, and terms of letting out the contract, and the same shall be given to the lowest responsible bidder.
Disposition of profits
Sec. 2. All the profits arising from said road are hereby appropriated and set apart to pay the interest on the one hundred thousand dollars of State bonds authorized to be applied by the Fund commissioner towards the completion of so much of said road as lies between Jacksonville and Springfield, and the remainder, if any, shall be appropriated as may be directed by law.3
Approved, February 27, 1841.
1Wickliffe Kitchell introduced HB 273, originally titled “ A Bill Concerning Appeal Bonds and Costs,” in the House of Representatives on February 16, 1841. On February 19, the House struck out the second section. On February 23, the House tabled the bill by a vote of 53 yeas to 14 nays, with Abraham Lincoln not voting. On February 27, the House struck out all after the enacting clause and inserted a substitute. The House passed the bill as substituted, amending the title so as to read “A Bill in relation to the Northern Cross Railroad.” The Senate concurred on February 27. On February 27, the Council of Revision approved the bill and the act became law.
Illinois House Journal. 1840. 12th G. A., 408, 444, 471, 477, 559; Illinois Senate Journal. 1840. 12th G. A., 437, 446.
2On February 27, 1841, the House of Representatives replaced the original bill with a substitute and amended the title accordingly.
Illinois House Journal. 1840. 12th G. A., 559.
3Earlier in the session, the General Assembly had passed an act requiring the governor to give over to the fund commissioner as many canal bonds as the canal fund owed the internal improvement fund. The act authorized the fund commissioner to apply $100,000 in those bonds for the completion of the Northern Cross Railroad from Jacksonville to Springfield.

An Act in relation to the Northern Cross Railroad between Springfield and Jacksonville. [1841-02-27]. /documents/D283805b. The Papers of Abraham Lincoln Digital Library.