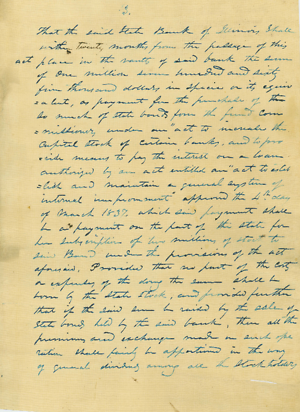 3 3.
That the said State Bank of Illinois Shall withi^n^ ^twenty^ months from the passage of this ^act^ place in the vaults of said bank the sum of one million seven hundred and sixty five thousand dollars in specie or its equivalent, as payment for the purchase of the so much of state bonds form the fund commissioners under an “act to increase the capital stock of certain banks, and to provide means to pay the interest on a loan authorized by an act entitled an “act to establish and maintain a general system of internal improvement” approved the 4th day of March 1837, which said payment shall be a payment on the part of the state for [?] subscription of two millions of stock to said Bond under the provisions of the act aforesaid, Provided that no part of the costs or expenses of the doing the same shall be born by the state stock, and provided further that if the said sum be raised by the sale of state bonds held by the said bank, then all the premiums and exchange made in such operation shall fairly be apportioned in the way of general dividends among all the stockholders

Fragment of amendment to "A Bill in relation to the State Bank of Illinois". [1841-01-27]. https://papersofabrahamlincoln.org/documents/D283832. The Papers of Abraham Lincoln Digital Library.