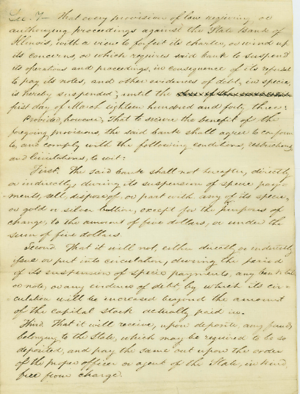 Sec. [Section][1?]. That every provision of law requiring or authorizing proceedings against the State Bank of Illinois, with a view to forfeit its charter, or wind up its concerns, or which requires said bank to suspend its operations and proceedings in consequence of its refusal to pay its notes, and other evidences of debt, in specie, is hereby suspended, until the close of the next session first day of March eighteen hundred and forty three:
Provided, however, That to secure the benefit of the foregoing provisions, the said bank shall agree to conform to, and comply with the following conditions, restrictions, and limitations, to wit:
First. The said bank shall not hereafter, directly or indirectly, during its suspension of specie payments, sell, dispose, or part with, any of its specie, or gold or silver bullion, except for the purposes of change, to the amount of five dollars, or under the sum of five dollars.
Second. That it will not, either directly or indirectly issue or put into circulation, during the period of its suspension of specie payments, any bank bill or note, or any evidence of debt, by which its circulation will be increased beyond the amount of the capital stock actually paid in.
Third. That it will receive, upon deposite, any funds belonging to the State, which may be required to be so deposited, and pay the same out upon the order of the proper officer or agent of the State, in kind, free from charge.
<Page 2>