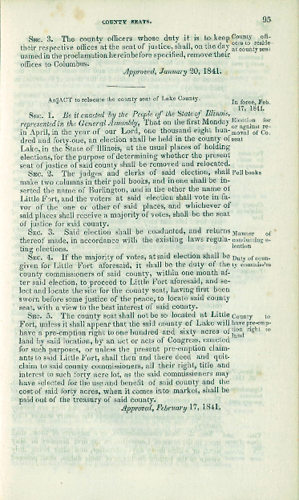 Related Document(s):
A Bill to Relocate the County Seat of Lake County

In force, Feb.[February] 17, 1841.
An ACT to relocate the county seat of Lake County.
1
Election for or against removal of Co.[County] seat
Sec.[Section] 1. Be it enacted by the People of the State of Illinois, represented in the General Assembly, That on the first Monday in April, in the year of our Lord, one thousand eight hundred and forty-one, an election shall be held in the county of Lake, in the State of Illinois, at the usual places of holding elections, for the purpose of determining whether the present seat of justice of said county shall be removed and relocated.
Poll books
Sec. 2. The judges and clerks of said election, shall make two columns in their poll books, and in one shall be inserted the name of Burlington, and in the other the name of Little Fort, and the voters at said election shall vote in favor of the one or other of said places, and whichever of said places shall receive a majority of votes, shall be the seat of justice for said county.
Manner of conducting election
Sec. 3. Said election shall be conducted, and returns thereof made, in accordance with the existing laws regulating elections.
Duty of county commiss’rs
Sec. 4. If the majority of votes, at said election shall be given for Little Fort aforesaid, it shall be the duty of the county commissioners of said county, within one month after said election, to proceed to Little Fort aforesaid, and select and locate the site for the county seat, having first been sworn before some justice of the peace, to locate said county seat, with a view to the best interest of said county.
County to have pre-emption right to land
Sec. 5. The county seat shall not be so located at Little Fort, unless it shall appear that the said county of Lake will have a pre-emption right to one hundred and sixty acres of land by said location, by an act or acts of Congress, enacted for such purposes, or unless the present pre-emption claimants to said Little Fort, shall then and there deed and quit-claim to said county commissioners, all their right, title and interest to such forty acre lot,2 as the said commissioners may have selected for the use and benefit of said county and the cost of said forty acres, when it comes into market, shall be paid out of the treasury of said county.
Approved, February 17, 1841.
1On January 22, 1841, Milton Carpenter introduced HB 124 in the House of Representatives. On February 6, the House amended the fifth section of the bill by striking out the word “eighty” wherever it appeared and inserting in lieu thereof the word “forty.” The House passed the bill as amended. On February 8, the Senate passed the bill. On February 17, the Council of Revision approved the bill and the act became law.
Illinois House Journal. 1840. 12th G. A., 264, 285, 343, 355, 421, 423; Illinois Senate Journal. 1840. 12th G. A., 252, 255.
2On February 6, 1841, the House of Representatives amended this section by striking out the word “eighty” in the two places it occurred and inserting in lieu thereof the word “forty.”
Illinois House Journal. 1840. 12th G. A., 343.