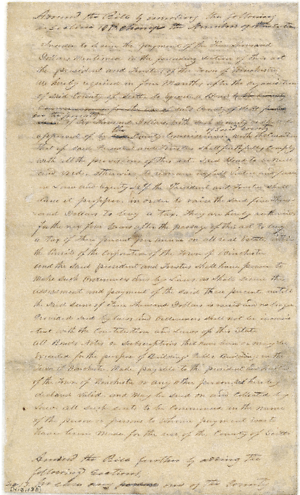 Amend the Bill by inserting the following as section 10 11 change the Numbers of this section
In order to secure the payment of the Five Thousand Dollars mentioned in the preceding section of this act the president and Trustees of the Town of Winchester are hereby required in four Months after the organisation of said County of Scott, to Execute a Bond to the County Commissioners for the use of said County of Scott for the Sum ^in the penalty^ of six Thousand Dollars with such security as shall be approved of by said ^the^ county commisioners ^of said county^ with the conditions that if said President and Trustees shall faithfully comply with all the provisions of this act, said Bond to be Null and void, otherwise to remain in full Virtue and force in Law and Equity. If the President and Trustees shall deem it propper, in order to raise the said five Thousand Dollars, to levy a tax, They are hereby authorised for the nex four Years after the passage of this act to levy a tax of Three per cent per annum on all real Estate within the limits of the corporation of the Town of Winchester and the said president and Trustees shall have power to make such ordinances and by Laws, as shall secure the assessment and payment of the said three per cent untill the said sum of Five Thousand Dollars is raised and no longer Provided said by laws and ordinances shall not be inconsistent with the Constitution and Laws of this State all Bonds Notes or subscriptions that have been or may be executed for the purpose of Building Public Buildings in the Town of Winchester, made payable to the president and Trustees of the Town of Winchester or any other person, are hereby declared valid, and may be sued on and collected by Law. all such suits to be commenced in the name of the person or persons to whome payment was to have been made for the use of the County of Scott
Amend the Bill further by adding the following sections,
Sec[Section] 13. In case any persons one of the County
<Page 2>
commissioners of Morgan county shall be included in the county of Scott an Election shall be held in the county of Morgan to fill the vacancy thereby created, as in other cases of Vacancy.
Section 14. until a new apportionment can be made of Interest on the school college and seminary funds, the school commissioners of Morgan county shall apportion that fund among the schools in the counties of Morgan and Scott as though it was all the county of Morgan.
<Page 3>
<Page 4>
[docketing]
Amndts[Amendments] adopted

Amendment to “A Bill to Create and Organize the County of Scott". [1839-01-21]. https://papersofabrahamlincoln.org/documents/D284678. The Papers of Abraham Lincoln Digital Library.