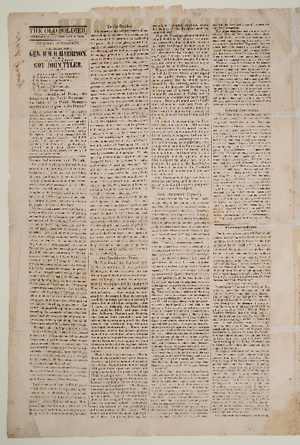 Anson G. Henry and Others to the Subscribers and Friends of The Old Soldier, 1 February 18401
To our Subscribers and Friends.
We wish it distinctly understood, in the outset of our undertaking, that it is no money speculation. In common with our fellow citizens of the West, we know and feel that a reform in the administration of the Government, is absolutely necessary; and to effect this, we have volunteered our services in laying before the good people of Illinois facts, and a full and fair comparison of the relative merits of the two candidates now before the people, for the next Presidency.
We have fixed a price, for the publication, barely sufficient to pay the cost of printing and mailing; so that after paying our printer, not one cent will be left to us, (if we receive 50 cents for every copy issued,) to pay for ink and paper consumed in preparing our editorials. It will not, therefore, be expected of us, to send the paper to any one that does not pay in advance. The amount is so trifling, that it will not be expected. A sense of duty, and not gain, has impelled us “to push this little boat into the stream.” We feel that it is every man’s duty to do all in his power to change bad things to better; and this can be done, most certainly, by circulating correct information among the people; and if we can get money enough to pay our printer, it is all we ask; for the honor and glory of fighting under the glorious banner of the Hero of Tippecanoe and Thames, is compensation enough for us. Let all, then, resolve to do their duty. Let those who can afford it subscribe for a number of copies, and give them to those that need light, but are unable or unwilling to pay for it. Let county committees be vigilant and active in extending the circulation of the “Old Soldier;” and let every friend of reform and retrenchment be up and doing, and our efforts must and will be crowned with success.
We shall publish a large edition of the 1st [No]., so as to be able to supply any demand hereafter for back numbers; and we should like extremely well to be compelled to publish a second edition. A subscription has been raised for circulating a few copies gratuitously; consequently, those receiving it that are not subscribers, will not be charged for the paper, should they continue to receive it; which we hope they will do.
As we commence our editorial career with the nomination of Gen. Harrison, we shall end it with the announcement of his election to the Presidency, in November next.2
1Abraham Lincoln was one of the editors of the Old Soldier, so the text is attributed to him, but the extent of his participation in its composition is unknown.
2The Whig Party nominated Harrison for president and John Tyler for vice-president in December 1839 at its first national convention.
The publisher for the Old Soldier was Simeon Francis, who also published the Whig-leaning Sangamo Journal.
Franklin W. Scott, "Newspapers and Periodicals of Illinois, 1814-1879" (PhD diss., University of Illinois, 1910), 321, 323.

Anson G. Henry and Others to the Subscribers and Friends of The Old Soldier. [1840-02-01]. /documents/D303544. The Papers of Abraham Lincoln Digital Library.