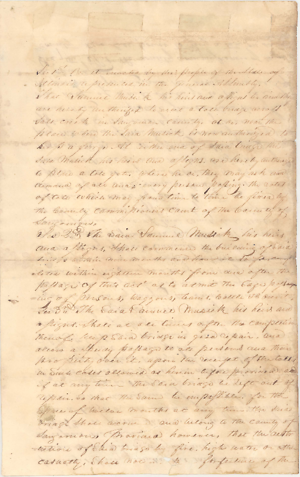 A Bill to Authorize Samuel Musick to Build a Toll Bridge across Salt Creek in Sangamon County, 20 December 18341
Sec[Section] 1st Be it enacted by the people of the State of Illinois represented in the General Assembly,
That Samuel Musick his heirs and assigns be and they are hereby autherized to erect a toll bridge across Salt creek in Sangamon county, at, or, near the place where the Said Musick is now autherized to keep a ferry. At either end of Said bridge the Said Musick his heirs and assigns, are hereby autherized to place a toll gate, where he or, they may ask and demand of all and every person passing, the rates of toll which may from time to time be fixed by the County commissioners court of the County of Sangamon,
Sec 2nd The Said Samuel Musick his heirs and assigns, Shall commence the building of Said bridge within nine months and have it so far completed within eighteen months from and after the passage of this act as to admit the Safe passageing of persons, waggons, teams, Cattle &c[etc.] over it,
Sec 3rd The Said Samuel Musick his heirs and assigns, shall at all times after the completion thereof, keep Said bridge in good repair, and allow a Speedy passage to all persons and their property over it, upon the receipt of the tolls in Such cases allowed as herein before provided, and if at any time the Said bridge be left out of repair, So that the Same be impassible, for the Space of twelve months at any time, the Said bridge Shall accrue and belong to the county of Sangamon, provided however, that the destruction of Said bridge by fire, high water or other casualty, shall not [. . .?] forfeiture of the
<Page 2>
previleges hereby granted but the Said Samuel Musick his heirs or assigns Shall procede immediately to repair the Same.
Sec 4th No person Shall within ten years hereafter build a bridge, or establish a ferry across Said Creek, within the distance of one mile above or below the Said bridge— provided the Said Samuel Musick his heirs or assigns Shall erect and keep up Said bridge for that Space of time as by this act autherized.
Sec. 5th Whenever the county commissioners of the said county of Sangamon Shall deem it expedient to purchase Said bridge they Shall have the right So to do by paying the Said Samuel Musick his heirs or assigns the origanal cost of Said bridge And for the purpose of enabling the County commissioners to make Said purchase, it Shall be the duty of Said Samuel Musick his heirs or assigns, to file with the clerk of the county commissioners court of Said county Such Vouchers as Shall be deemed Sufficient by the commissioners to ascertain the cost of Said bridge—
Sec 6th If the Said Samuel Musick his heirs or assigns shall at any time obstruct the ford on Said creek at or near the Said bridge, in any manner, he or they so offending— Shall forfeit and pay the Sum of one hundred dollars for every Such offence, to be recovered by action of Debt in any court having competent Jurisdiction thereof, one half of which Shall go to the use of the person informing, and the other to the use of the county—
Sec 7th That the county commissioners of said county have full power to levy a tax on said
<Page 3>
bridge; as is provided in an act to provide for the establishment of ferries, toll bridges, and turn pike roads: Approved February 12th 1827.2
[docketing]
12/20/1834
David Prickett
Passed H. R. Decr 20. 1834.
D. Prickett Clk.[Clerk] H. R
<Page 4>
[docketing]
H. R.
A Bill for an act "to autherise Samuel Musick to build a toll bridge across Salt creek in Sangamon County
[docketing]
[12]/[16]/[1834]
Engrossed.
[docketing]
[01]/[07]/[1835]
David Prickett
to be Enrolled
Clk. H. R.
1Abraham Lincoln wrote Section 7 of this document.
Abraham Lincoln introduced HB 34 in the House of Representatives on December 15, 1834. On December 17, the House referred the bill to a select committee composed of Lincoln, William Carpenter, and John T. Stuart. On December 20, the select committee reported back this amended bill, which the House approved. The Senate passed the bill on December 24. On January 7, 1835, the Council of Revision approved the bill, and the act became law.
Illinois House Journal. 1835. 9th G. A., 1st sess., 86, 118, 127, 131, 141-42, 160, 222, 240, 245; Illinois Senate Journal. 1835. 9th G. A., 1st sess., 121, 122, 126, 132, 192, 195.
2Abraham Lincoln added this section to the bill, likely as the result of the deliberations of the select committee of which he was a member. The House approved the amendment on December 20, 1834.
Illinois House Journal. 1835. 9th G. A., 1st sess., 131, 141-42.

A Bill to Authorize Samuel Musick to Build a Toll Bridge across Salt Creek in Sangamon County. [1834-12-20]. /documents/D200042b. The Papers of Abraham Lincoln Digital Library.