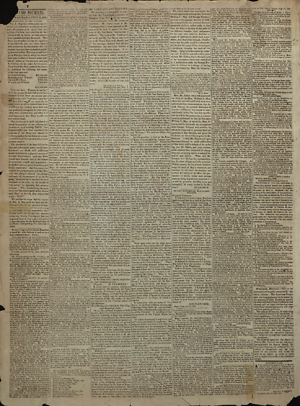 Related Document(s):
An Act to Provide for Receiving a Distributive Share of the Surplus Revenue of the United States on Deposit
Resolution regarding Surplus Revenue Act

Report of Speech at a Political Rally in the Court House at Springfield, Illinois, 11 July 18361
Mr. Lincoln succeeded Mr. Calhoun. At first he appeared embarrassed, and his air was such as modest merit always lends to one who speaks of his own acts. He claimed only so much credit as belonged to one of the members of the last Legislature, for getting the State out of debt. He next came to Mr. Calhoun2 and the land bill.3 At one fell stroke, be broke the ice upon which we have seen Mr. Calhoun standing, and left him to contend with the chilling waters and merciless waves. His speech became more fluent, and his manner more easy as he progressed. In these degenerate days it seems to be the fashion of the day for all parties to admire even the frailties of the administration. The Van Buren men, particularly, are even taking shelter like ghosts under the rotten bones and tombstones of the dead acts of the administration. Mr. Lincoln, however, lifted the lid, and exposed to the eye the wretched condition of some of the acts of the Van Buren party. A girl might be born and become a mother before the Van Buren men will forget Mr. Lincoln. From beginning to end Mr. Lincoln was frequently interrupted by loud bursts of applause from a generous people.4
1An anonymous author furnished this report to the Whig Sangamo Journal, which printed it on July 16, 1836. The event, which seems to have been a political debate between a handful of prominent Sangamon County Whigs and Democrats, took place at the Sangamon County Courthouse on July 11. The report includes summaries of speeches by Ninian W. Edwards, Dan Stone, Jacob Early, John Calhoun, Richard Quinton, and Lincoln.
2It is unclear whether the report is referring to John Calhoun of Springfield, who spoke immediately before Lincoln; or U.S. Senator John C. Calhoun, who supported and co-authored the final version of the Distribution Act.
3The “land bill” is Whig U.S. Senator Henry Clay’s 1836 proposal to distribute to the states the proceeds from the sale of federally-owned lands. At the same time, Democratic Senator John C. Calhoun proposed a bill to regulate deposits of public money in banks. The bill that finally passed in June 1836, “An Act to Regulate the Deposites of Public Money,” was a compromise measure generally referred to as the Deposit Act or the Distribution Act. It created a national banking system and also made provision for the disbursement of all federal surplus revenue to the states, not just the surplus deriving from federal land sales. All money in the treasury on January 1, 1837, in excess of $5 million was to be deposited with the states in proportion to their population. States were to receive the money in four installments in January, April, July, and October 1837. Illinois received disbursements of $477,919, $142,327 of which was used to construct railroads as part of the state’s internal improvement system, and the remainder was to be invested in the capital stock of the State Bank of Illinois and the Bank of Illinois. Due to the Panic of 1837, the federal government was unable to pay the final installment, contributing to the financial problems of the states.
Robert V. Remini, Andrew Jackson and the Bank War (New York: W. W. Norton, 1967), 170-71; Robert V. Remini, Henry Clay: Statesman for the Union (New York: W. W. Norton, 1991), 487-88; “Report from the Secretary of the Treasury,” December 27, 1839, Public Documents Printed by the Order of the Senate of the United States (Washington, DC: Blair and Rives, 1840), v. 2, no. 14, 69-70; “An Act to Regulate the Deposites of Public Money,” 23 June 1836, Statutes at Large of the United States 5 (1856):52-56.
4In July 1836, Lincoln (a Whig) and Calhoun (a Democrat) were opponents in Sangamon County for a seat in the Illinois House of Representatives. At the election on August 1, Lincoln collected 1,716 votes, the highest total for any of the 17 candidates. The top seven candidates won election and Calhoun, who received 1,278 votes, finished an unsuccessful eighth.
Theodore C. Pease, ed., Illinois Election Returns, 1818-1848, vol. 18 of Collections of the Illinois State Historical Library (Springfield: Illinois State Historical Library, 1923), 299.

Summary of Speech at a Political Rally in the Court House at Springfield, Illinois. [1836-07-11]. /documents/D200078. The Papers of Abraham Lincoln Digital Library.