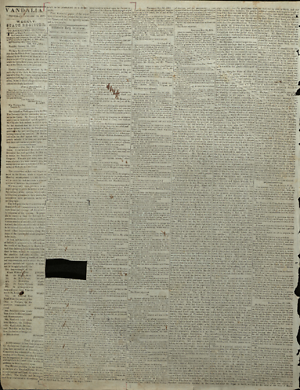 Summary of Legislative Debate regarding “A Bill for the Organization of the County of Van Buren,” 21 December 18361
Mr. Lincoln, from the select committee to which was refered the bill for the organization of the county of reported the same with amendments. One of the amendments was to fill the blank with Marshall.
Mr. Nowlin moved to amend the amendment by striking out Marshall and inserting Van Buren; so that the new county should be called Van Buren.
Mr. Douglass said, the name of Marshal and Van Buren were both mentioned before the committee; and he thought there must have been some misunderstanding on the part of the committee about the name.
The question was then taken on the amendment to the amendment, inserting Van Buren instead of Marshall, and carried in the affirmative.—Ayes 52.
The various amendments reported by the committee, were then agreed to.
Mr. Dawson moved to amend the bill by striking out a part of the first section, and inserting as follows:
“Line dividing ranges five and six, thence south along the range line between five and six, to the south west corner of township No. 18 north, of range five west, thence diagonally across ranges six and seven.”
Mr. Adams said, he was opposed to making any change in the boundaries as presented by the bill.
Mr. Dawson said that the House would bear in mind that the petition upon which this bill was founded had come from the two counties of Morgan and Sangamo, although the most of the petitioners we[r]e from the latter county. The bill proposes to cut off a part of the county of Sangamo only, when the petition calls for a part of Morgan also. He believed the petition had been altogether laid aside in the committee, they had acted as without any petition; hence the question ought to be presented to the people anew.
Mr. Lincoln said, that as a member of the committee, he would state that the bill before the House was a matter of compromise. He was willing to take the bill, because before any division of Sangamo could take place, the bill declared that the people of Sangamo should themselves so decide. He would sustain the bill as it stood, the new county would be too small if lessened. He was opposed to offering to the people a territory too small for their acceptance.
Mr. Stone said, that as various alterations had been made in it since the petition was received, and desiring time to examine, he would move that the House adjourn.
The motion prevailed, and the House adjourned.
1This debate concerned “A Bill for the Organization of the County of Van Buren”. In 1836, Sangamon County encompassed parts of the present-day counties of Christian, Logan, Menard, and Mason. The new county proposed by this bill would have included present-day southern Mason County and most of present-day Menard County.