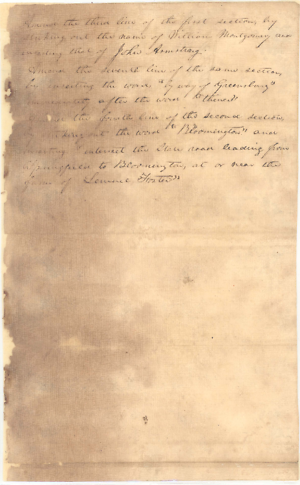 Amendment to “A Bill to Establish a State Road from Jacksonville to Syracuse and Bloomington,” [30 January 1837]1
Amend the third line of the first section, by striking out the name of William Montgomery and inserting that of John Armstrong.
Amend the seventh line of the same section, by inserting the words "by way of Greensburg" immediately after the word "thence"
Amend the fourth line of the second section, by striking out the word "Bloomington" and inserting "intersect the State road leading from Springfield to Bloomington, at or near the farm of Lemuel Foster"
<Page 2>
[docketing]
[01]/[30]/[1837]
Prickett, David (Pricket)
amendments adopted
clk H R
[docketing]
[01]/[30]/[1837]
Prickett, David (Pricket)
To be Engrossed
clk H R
1Abraham Lincoln wrote the entirety of the first page of this document.
On January 25, 1837, Stephen A. Douglas presented to the House of Representativesthe petition of citizens of Morgan and Sangamon counties, requesting a state road from Jacksonville to Bloomington. The House referred the petition to the Committee on Petitions. On behalf of the Committee, Douglas introduced HB 151 in the House on January 27. On the motion of Abraham Lincoln, the House referred the bill to a select committee, of which Lincoln was a member. On January 30, Lincoln of the select committee reported the bill back with these amendments, which the House concurred in. On February 8, the House passed the bill as amended. On February 10, the Senate referred the bill to a select committee. The select committee reported back the bill on February 17 with an amendment, in which the Senate concurred. On February 21, the Senate passed the bill as amended. On February 28, the House concurred in the Senate amendment. On March 2, the Council of Revision approved the bill, and the act became law.
Illinois House Journal. 1836. 10th G. A., 1st sess., 378, 407, 424, 519, 668, 759, 792, 807; Illinois Senate Journal. 1836. 10th G. A., 1st sess., 377, 391, 447-48, 477, 589.

Amendment to “A Bill to Establish a State Road from Jacksonville to Syracuse and Bloomington”. [1837-01-30]. /documents/D200094. The Papers of Abraham Lincoln Digital Library.