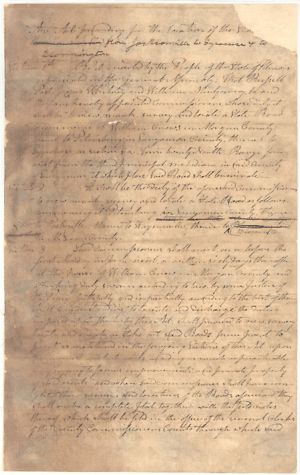 An Act providing for the location of the [?] therein named ^from Jacksonville to Syracuse & to Bloomington^
Section 1st Be it enacted by the People of the State of Illinois represented in the General Assembly: That Russell Post, ^X^ Jonas Whitney[,] and William Montgomery, be and they are hereby appointed Commissioners, whose duty it shall be, to view, mark, survey[,] and locate a State-Road to commence at William Crow's in Morgan County; ^X^ thence to Petersburg in Sangamon County, thence to Syracuse, in section six, Town twenty North, Range four west from the third principal meredian, in said county of Sangamon, at which place said Road shall terminate.
Section 2 It shall be the duty of the aforesaid commissioners to view, mark, survey[,] and locate a State Road, as follows commencing at Petersburg in Sangamon County, thence ^X^ to Postsville, thence to Waynesville, thence to ^intersect the state road near the farm of [Lemuel Foster?] ^ ^Bloomington^ Bloomington in McLean County.
Section 3 Said commissioners shall meet on or before the first Monday in June next or within sixty days thereafter at the home of William Crow in Morgan County, and after being duly sworn according to law, by some Justice of the Peace, faithfully and impartially, according to the best of their skill & understanding, to execute and discharge the duties imposed upon them by this Act, shall proceed to view, survey[,] locate[,] and mark or stake out said Roads, from point to point as mentioned in the foregoing Sections of this Act, upon the nearest and best routs, avoiding as much as practicable any injury to farms, improvements, and private property of said routs, and when said commissioners shall have completed their surveys and locations of the Roads aforesaid, they shall make a complete plat, together with the field notes thereof, which shall be filed in the office of the several clerks of the County Commissioners Courts through which said
<Page 2>
Roads may pass, within one month after said Roads are surveyed and located, and said Roads when so surveyed and located, shall be deemed public State Roads.
[Section?] 4th The County Commissioners Courts of the several counties through which said Roads pass, shall appoint Supervisors of said Roads, who shall cause the same to be opened fifty feet wide, and kept in repair, as other State Roads.
[Section?] 5 The County Commissioners Courts of the several counties through which said Roads pass, shall allow to each of said Road Commissioners a compensation for their services not exceeding two Dollars per day to each of said commissioners and to be paid out of the County Treasuries of such counties in proportion to the portion of said Roads in each county.
[docketing]
[A Bill for An Act to?] Locate the State Roads therein named. ^from Jacksonville to^ ^Syracuse & also to Bloomington^
[docketing]
[02]/[27]/[1837]
Report from the Committee on Petitions
[docketing]
[...?]
[docketing]
No 121
A Bill for [?] from Jacksonville [?] Syracuse, & also [to] Bloomington
[endorsement]
[02]/[27]/[1837]
Sel Com
Lincoln
Henshaw
Stuart
[docketing]
[01]/[30]/[1837]
Prickett, David (Pricket)
To be [Engrossed?]
clk H R

A Bill for a State Road from Jacksonville to Syracuse and Bloomington. [1837-01-27]. /documents/D253901b. The Papers of Abraham Lincoln Digital Library.