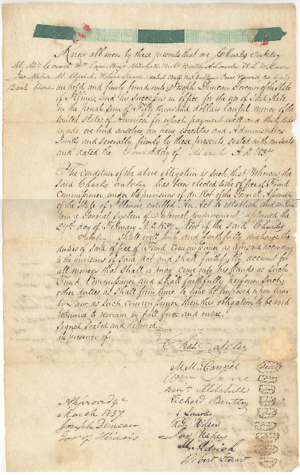 Bond for Charles Oakley as Fund Commissioner, 4 March 18371
Know all men by these presents that weCharles Oakley M. McConnel. Wm Lane. Benjn Mitchell. Richd Bently. A. Lincoln. R. L Wilson Jas. Naper. M. Aldrich. Robert Stuart. Asahel. Balf. R. N. Cullum. Jonas Rawalt Jas. Craig Danl Stoneare held and firmly bound unto Joseph Duncan Governor of the State of Illinois, and his Successors in office, for the use of Said State in the penal Sum of Fifty thousand dollars, lawful money of the United States of America for which payment well and truly to be made, we bind ourselves, our heirs, executors and Administrators Jointly and Severally, firmly by these presents, Sealed with our Seals and dated the Fourth day of March A.D. 1837.
The condition of the above obligation is such, that Whereas, the Said Charles Oakley has been elected to the office of Fund Commissioner, under the provisions of An Act of the General Assembly of the State of Illinois, entitled "An Act to establish and maintain a General System of Internal improvement," approved the 27th day of February A.D. 1837. Now if the said Charles Oakley, shall well, truly and faithfully discharge the duties of Said office of Fund Commissioner as aforsaid according to the provisions of Said Act, and Shall faithfully, account for all moneys that Shall or may come into his hands as Such Fund Commissioner and Shall faithfully perform Such other duties as Shall from time to time be imposed upon him by Law, as Such commissioner, then this obligation to be void otherwise to remain in full force and virtue,2
Signed, Sealed and delivered in presence of3
Chas. Oakley
seal M. McConnel
seal Wm Lane
seal Benjn Mitchell
seal Richard Bentley
seal A Lincoln
seal R. L. Wilson
seal Jos Naper
seal M. Aldrich
seal Robert Stuart
seal
[docketing]
03/04/1837
Approved 4th March 1837Joseph Duncan
Govr[Governor] of Illinois
<Page 2>
Asahel. F. Ball
seal Richard N Cullom
seal Jonas Rawalt
seal James Craig
seal Dan Stone
seal Thomas Mather
seal
seal
seal
seal
seal
[certification]
03/04/1837
Smith, Theophilus W.
State of Illinois: On this fourth day of March 1837. personally appeared before the undersigned, One of the Justices of the Supreme Court of the State of Illinois. Charles Oakley. the person named in the aforegoing Bond who was duly sworn to support the Constitution of the United States. and of this State and to faithfully. honestly. and diligently discharge the duties of fund Commissioner according to Law and the best of his abilities
In Testimony whereof the undersigned hath set his name the day and year aforesaid
Theophilus W. Smith
<Page 3>
<Page 4>
[docketing]
1837 (2)
[docketing]
C. oakleys Bond
[docketing]
Fund Commissioner
1Abraham Lincoln signed his name to this bond.
2Section one of the internal improvement act created a three-person board of fund commissioners to negotiate loans, buy and sell bonds, deposit and withdraw money, and administer the various fiscal aspects of the internal improvement system. Each commissioner was required to take out a penal bond of $50,000 to ensure that he would faithfully discharge the duties of the office. On March 1, the General Assembly elected Oakley, Moses M. Rawlings, and Thomas Mather as the first fund commissioners.
Illinois House Journal. 1836. 10th G. A., 1st sess., 789.
3Roy P. Basler stated in The Collected Works of Abraham Lincoln that the document carried a total of fifty-one signers, including the names of the persons named in the bond proper. The Illinois State Archives makes the same claim in its description of the document.