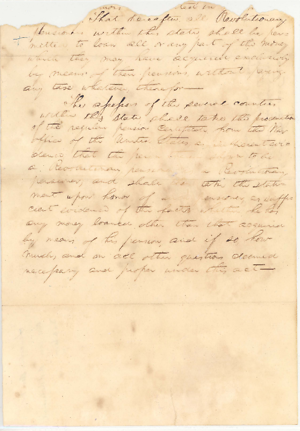 Fragment of an Amendment to a Bill to Amend “An Act concerning the Public Revenue,” Approved February 1839, [2 January 1840]1
. . . mors . . . ted . . . in . . .. That hereafter all Revolutionary pensioners within this state, shall be permitted to loan all or any part of the money which they may have acquired exclusively by means of their pensions, without paying any tax whatever, therefor—
The assessors of the several counties within this state, shall take the production of the regular pension certificate from the War office of the United States, as sufficient evidence, that the person therein shown to be a Revolutionary pensioner is a Revolutionary pensioner; and shall then take the statement upon honor of such pensioner, as sufficient evidence of the facts whether he has any money loaned other than that acquired by means of his pension, and if so, how much, and on all other questions deemed necessary and proper under this act—
<Page 2>
[docketing]
Lincoln, Abraham (President)
A bill for an act exempting Revolutionary pensioners from taxation on loaned money—
[docketing]
Lincoln's amdt[amendment] as an additional section
1Abraham Lincoln wrote the text of this bill as well as the bill’s title on page two. The title and the enacting clause have been torn off the document.
Roy P. Basler, editor of The Collected Works of Abraham Lincoln, dated “An Act concerning Public Revenue," February 1837, but evidence clearing show that the act became law in February 1839.
On January 2, 1840, Lincoln introduced this as an individual bill entitled “A Bill for an Act Exempting Revolutionary Pensioners from Taxation on Loan Money” immediately after Peter Green introduced a bill entitled “A Bill to Amend ‘An Act concerning the Public Revenue,’ Approved February 26, 1839.” Lincoln moved his bill as an amendment adding an additional section to Green’s bill. The House adopted, and referred the bill as amended to the Committee on Finance, of which Lincoln was a member. Both the House and Senate eventually passed Green’s bill, and the act became law without Lincoln’s amendment concerning Revolutionary pensioners.
Illinois House Journal. 1839. 11th G. A., special sess., 116-17, 260, 318-19; Illinois Senate Journal. 1839. 11th G. A., special sess., 210.