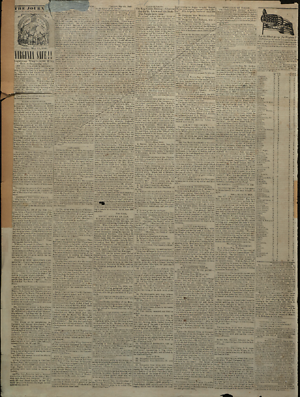 Summary of Speech at Tremont, Illinois, 2 May 18401
Immediately after dinner, the large Court House was filled to overflowing, and the debate was opened by Mr. Lincoln, who after some general and appropriate remarks concerning the design and object of all Governments, drew a vivid picture of our prosperous and happy condition previous to the time of the war which was waged against the U.S. Bank, the constitutionality, as well as the great utility of which he vindicated in a most triumphant manner.2 He next turned his attention to the Sub-Treasury, the hideous deformity and injurious effects of which were exposed in a masterly style. He then reviewed the political course of Mr. Van Buren, and especially his votes in the Ne[w] York Convention in allowing Free Ne[gr]oes the right of suffrage, and his Jan[us]-faced policy in relation to the war.3 In [th]is part of his speech Mr. Lincoln was [pa]rticularly felicitous, and the frequent [a]nd spontaneous bursts of applause fro[m] the People, gave evidence that their he[art]s were with him. He related many [hi]ghly amusing anecdotes which conv[ulse]d the house with laughter; and conc[lud]ed his eloquent address with a succe[ssf]ul vindication of the civil and military [r]eputation of the Hero of Tippecanoe.
1Lincoln’s remarks came as a part of a debate between Lincoln, Stephen A. Douglas, William May, and William Thomas. The topic was the upcoming presidential election. After the Whig National Convention nominated William Henry Harrison for president, Lincoln took charge of Harrison’s campaign in Illinois, canvassing the state to promote the Whig Party and its ticket. In March, Lincoln began campaigning as he rode the Eighth Judicial Circuit. Lincoln commenced this debate at noon after the close of the Tazewell County Circuit Court. Douglas offered a rebuttal.
Sangamo Journal (Springfield, IL), 15 May 1840, 2:3; The Lincoln Log: A Daily Chronology of the Life of Abraham Lincoln, 2 May 1840, http://www.thelincolnlog.org/Results.aspx?type=CalendarDay&day=1840-05-02; Michael Burlingame, Abraham Lincoln: A Life (Baltimore, MD: The Johns Hopkins University Press, 2008), 1:149-58.
2Lincoln here is making reference to President Andrew Jackson’s “war” with the Second Bank of the United States, typified by Jackson removing public deposits from the bank and depositing the money in selected state banks, called “pet banks” by Jackson’s critics.
Robert V. Remini, Andrew Jackson and the Bank War: A Study in the Growth of Presidential Power (New York: W. W. Norton, 1967), 67-153.
3During the campaign of 1840, Whigs sought to counter the Democratic claim that Harrison was an abolitionist by repeating an accusation, originally made in the 1836 election, that Van Buren endorsed enfranchisement for free blacks during the 1821 New York Constitutional Convention. Van Buren voted in favor of giving blacks the right to vote, but later in the convention voted that they be excluded unless they possessed property valued at $250.
“Janus-faced” refers to Van Buren’s supposed duplicitous, two-faced behavior during the War of 1812. Van Buren’s opponents after the war regularly condemned him for his reluctance to join the fighting--he turned down the offer of a military commission--and for not doing enough in the New York Senate to support the war effort. In point of fact, Van Buren was a War Hawk who crafted and shepherded through many pieces of war legislation, including the raising of troops. In September 1814, he authored a radical measure allowing the governor to conscript 12,000 men between the ages of eighteen and forty-five to defend the state. The New York Legislature passed the bill, but the war ended before it could become operational.
Nathaniel H. Carter, William L. Stone, and Marcus T. C. Gould, Reports of the Proceedings and Debates of the Convention of 1821, Assembled for the Purpose of Amending the Constitution of the State of New York (Albany, NY: E. and E. Hosford, 1821), 178-92, 557; Donald B. Cole, Martin Van Buren and the American Political System (Princeton: Princeton University Press, 1984), 36, 40-41, 56-57, 70-71; Ted Widmer, Martin Van Buren (New York: Henry Holt, 2005), 41-42, 49; John C. Fitzpatrick, ed., The Autobiography of Martin Van Buren, Annual Report of the American Historical Association for the Year 1918 (Washington, DC: Government Printing Office, 1920), 2:45-49; Donald B. Cole, “Van Buren, Martin,” American National Biography, ed. by John A. Garraty and Mark C. Carnes (New York: Oxford University Press, 1999), 22:159-60; “An Act to Authorise the Raising of Troops for the Defense of this State,” New York Senate Journal. 1814, 38th Session, 47-51.