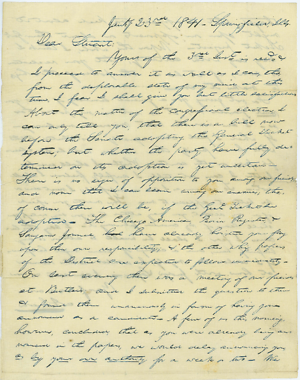 Abraham Lincoln to John T. Stuart, 23 January 18411
Jany 23rd 1841— Springfield, Ills.Dear Stuart:
Yours of the 3rd Inst[Instant] is recd[received] & I proceed to answer it as well as I can, tho[though], from the deplorable state of my mind at this time, I fear I shall give you but little satisfaction.2 About the matter of the congressional election, I can only tell you, that there is a bill now before the Senate adopting the General Ticket system; but whether the party have fully determined on it's adoption is yet uncertain—3 There is no sign of opposition to you among our friends; and none that I can learn among our enemies; tho;, of course, there will be, if the Genl[General] Ticket be adopted— The Chicago American, Peoria Register, & Sangamo Journal, had have already hoisted your flag upon their own responsibility; & the other whig papers of the District are expected to follow immediately— On last evening there was a meeting of our friends at Butler's; and I submitted the question to them & found them unanimously in favor of having you announced as a candidate— A few of us this morning, however, concluded, that as you were already being announced in the papers, we would delay announcing you, as by your own authority for a week or two— We
<Page 2>
thought that to appear too keen about it might spur our opponents on about their Genl Ticket project—4Upon the whole, I think I may say with certainty, that your reelection is sure, if it be in the power of the whigs to make it so—5
For not giving you a general summary of news, you must pardon me; it is not in my power to do so— I am now the most miserable man living— If what I feel were equally distributed to the whole human family, there would not be one cheerful face on the earth— Whether I shall ever be better I can not tell; I awfully forebode I shall not— To remain as I am is impossible; I must die or be better, it appears to me— The matter you speak of on my account, you may attend to as you say, unless you shall hear of my condition forbidding it— I say this, because I fear I shall be unable to attend to any business here, and a change of scene might help me— If I could be myself, I would rather remain at home with Judge Logan— I can write no more.
Your friend, as ever—A. Lincoln
<Page 3>
<Page 4>
SPRINGFIELD IL.
JAN[January] 2[3?]
f
Hon: John T. StuartWashingtonD.C.
[docketing]
Stuart, John T.
A. Lincoln
Jan 23rd
ans
[docketing]
1841
1Abraham Lincoln wrote the letter, signature, and address. John T. Stuart wrote the first docketing on page four.
2Stuart’s letter of January 3, 1841, is not extant. Presumably, Lincoln’s “deplorable state” of mind was the result of his reputed breaking of his engagement to Mary Todd on, as Lincoln described it later to his friend Joshua F. Speed, the “fatal first of Jany[January] 41[1841].”
Abraham Lincoln to Joshua F. Speed.
3On January 5, 1841, John Pearson in the Senate introduced a bill entitled “A Bill Fixing the Manner of Congressional Elections.” If enacted into law, the bill would have presumably replaced the district system, which the General Assembly created in 1831, dividing the state into three congressional districts. Stuart represented the third congressional district. Some Democrats opposed the district system, believing that at large voting would strengthen party discipline and unity.
Illinois Senate Journal. 1840. 12th G. A., 137, “An Act to Lay Out the State into Districts, for the Purpose of Electing Representatives to the Congress of the United States,” 15 February 1831, Revised Laws of Illinois (1833), 235; Theodore Calvin Pease, The Frontier State, 1818-1848, vol. 2 of Sesquicentennial History of Illinois (Springfield: Illinois Centennial Commission, 1918), 293.
4Pearson’s bill never made it out of the Senate. On January 19, the Senate tabled the bill. On February 10, the Senate indefinitely postponed further consideration by a vote of 24 yeas to 13 nays. In March 1843, the General Assembly further expanded the district system by dividing the state into seven congressional districts.
Illinois Senate Journal. 1840. 12th G. A., 177, 248, 275; “An Act to Establish Seven Congressional Districts,” 1 March 1843, Laws of Illinois (1843), 71-72.
5Stuart received the Whig Party’s endorsement to run for representative of the third district, and in the election held on August 2, 1841, he defeated James H. Ralston with 52 percent of the vote to Ralston’s 47 percent.
Theodore C. Pease, ed., Illinois Election Returns, 1818-1848, vol. 18 of Collections of the Illinois State Historical Library (Springfield: Illinois State Historical Library, 1923), 122.